Stuff we did that you can do too…

There are variations to this of course but however you do it, a bandeja paisa makes the English Breakfast look like a wheatgrass and kale smoothie. 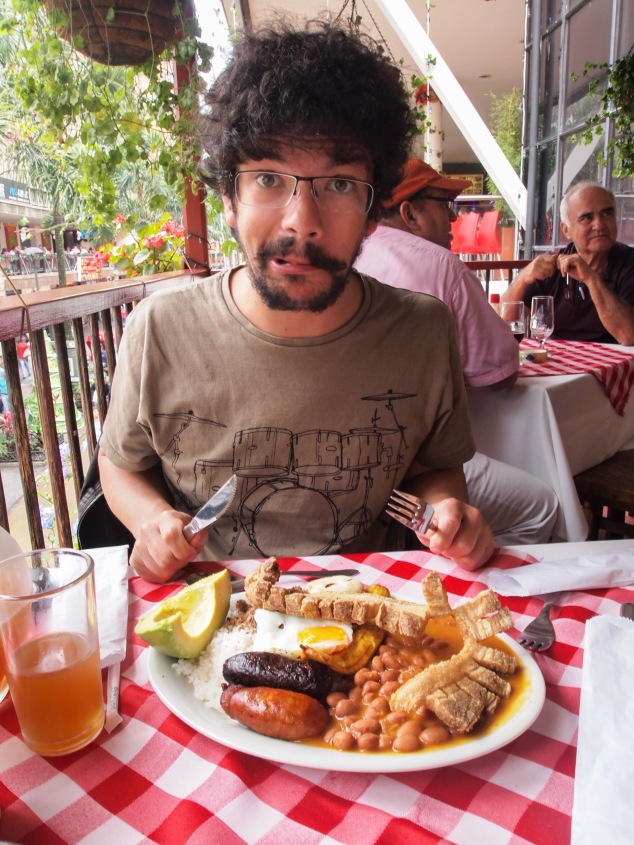 Don’t worry, he didn’t eat the whole thing – we shared a plate

Made by dissolving unrefined cane sugar in either hot or cold water. Essentially it’s nothing more exciting than sugary water, but the addition of a bit of lemon or lime turns it into a refreshing pick-me-up on hot days. You’ll find it sold on city streets, while out in the country it’s just as good for attracting hummingbirds as it is for refreshing tired hikers. 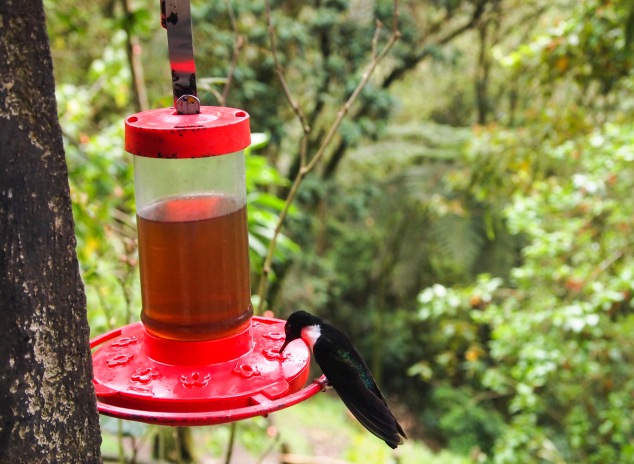 Try: A game of tejo

This is a game that dates back to pre-Columbian times. Players hurl metal discs weighing about 680g at gunpowder-filled squibs resting in pits full of clay, some 20m away. A loud bang means you scored points, but you can find out more about the scoring system here. Tejo is second only to football in the Colombia sporting consciousness. Best played while drinking copious amounts of beer.

There’s surprisingly little good stuff available to order in cafes or restaurants, with most of the quality beans earmarked for export. But near the coffee-making town of Salento, you can pick up some great fresh beans and grind them yourself. Try the Don Elias coffee tour and pick up a bag at the end.

Do: Consider flying instead of taking the bus

Buses are still the cheapest way to get around but Colombia has some surprisingly cheap and regular flights between its major cities. Check out Avianca or, if you can do without hold luggage, low-cost airline Viva Colombia does some good deals. The mix of dense jungle, high mountain plains and plunging valleys means that it can take 20 hours to get between cities that really aren’t that far away from one another. So if you book early and grab a good deal, flying can spare you a long journey through winding roads with someone being sick in a bag next to you. Seriously.

As Rob discussed in his post on former murder capital Medellin, Colombia has come a hell of a long way in the last decade. Reputations take longer to change than reality and it’s likely that friends and family will bombard you with horror stories about Colombia.* The truth is, the necessary precautions are much the same as you would take in any other part of Latin America. Of course Colombia has crime. The drugs trade has not vanished overnight (though it is largely contained in certain areas) and the wealth divide exists just as it does anywhere. Obviously don’t go wandering into the dodgiest neighbourhood at night waving your iPhone but would you really do that in any city?

Bogota is perfectly safe as long as you’re sensible

Above all, don’t let your preconceptions (or other people’s) stand in the way of getting the most out of this amazing, magical country.

* Or, if you’re Franki’s dad, a warning based entirely on a fictional scene in the film Romancing The Stone.

…the time our taxi was held up for half an hour by about ten thousand roller-bladers dressed in Father Christmas outfits. Colombians don’t do Christmas by halves.