If moving in together as a couple is daunting, the thought of backpacking with your other half is a terrifying prospect.

Unlike cohabitation, where at least one of you is likely to be at work for 10 hours a day, travelling means you are going to be joined at the hip. ALL. THE. TIME.

Telling people we were off around the world elicited delight, envy, surprise and – most of all – horror stories about perfect couples who went their separate ways after a blazing row in the foothills of the Himalayas.

Two months in, this is what we’ve learnt so far:-

1. Be realistic about what to expect

If you think every day will be a montage of the two of you pointing happily at capuchin monkeys and dancing salsa on the terrace of a charming bar, you’re wrong. Of course you’re going to share unique and unforgettable experiences…

Get your motor running… head out on the highway!

… But you’re also going to lie awake on stained sheets, sweating in the blistering heat while cockroaches scuttle across the floor of your crappy hostel. You’re going to get off a 16-hour bus ride spent next to a vomiting child and then have to negotiate with taxi drivers. 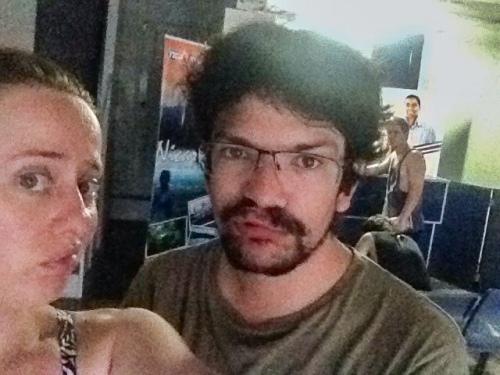 Worst of all, one of you is going to suffer an explosive stomach bug, while the other pretends to be deaf from the other side of a wafer-thin toilet door. As long as you accept all of this beforehand, you won’t be too surprised when it happens.

If you’re anything like us, one of you is considerably more organised than the other. This should not be an excuse to let that person do all of the hostel booking and the route-planning. We’ve found it helps to take turns as lead organiser.

NB: To date, most of the major fuck-ups have been committed by the ‘more organised’ Franki. But sharing the burden also applies to responsibility for mistakes, so Rob’s not being (too) smug about it.

Travelling means hours on end wedged into an uncomfortable seat with nothing to do. So we invented a travelling game called ‘Cow on a Truck’, based on the weird and wonderful sights you see on the road. Every time you spot some exotic oddity, you make your case for whether it is worthy of replacing the current leader. Both parties must agree for it to ascend to the top of the list. We began with Cow on a Truck and have since been through Fire Juggler at the Traffic Lights, a Fruit Car Named Papaya (long story) and are currently on Ten Thousand Rollerblading Santas, seen in Medellin, Colombia. That one’s gonna be tough to beat. 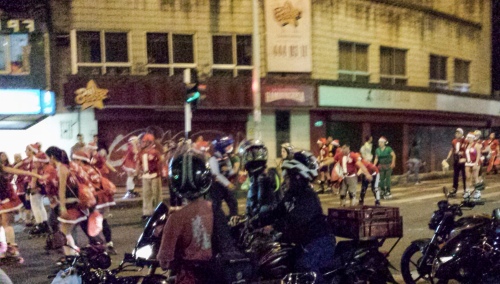 These rollerblading Santas held up all the traffic in Medellin for more than half an hour. Ho bloody ho.

Haggling is part and parcel of travel, be it with taxi drivers, local tour guides or market stall-holders. There’s nothing worse than when one of you agrees a price, only for the other to disagree vehemently after the fact. This not only weakens your negotiating position but also foster resentment between you. If possible, try to decide beforehand what prices/outcomes you’re prepared to accept, or at least have any impromptu discussions about it as discreetly as possible.

NB: The exception is when you’re making a deliberate play, using your partner as a negotiating prop. This only works if you’ve agreed the tactic in advance. ‘Look, I’m sorry but my boyfriend is walking away…I have to go with him unless you can do it for $10.’ Crafty but it often works.

5. Both learn the lingo

If at all possible, it helps if both of you have some local language skills. When we first arrived in Latin America Rob was the only one who spoke any Spanish. It’s been invaluable in terms of getting the best out of our surroundings and has saved us money too. It would have been all too easy for Franki to sit back and relax while Rob took charge. But if only one of you is doing the talking, that can become quite a strain on them. Luckily Franki is catching up fast now which should help spread the load. Languages aren’t everyone’s forte but if you are going to give it a go, it’s worth making sure you both learn a few words.

Being around the same person all the time means they WILL get on your nerves sometimes. You’re in a room the size of an Iraqi prison cell, trying to pack up everything you own, you’re just about to stuff that final pair of pants into an already overfull backpack and you turn around to find your other half standing right in the bloody way. Tough luck, that’s not their fault, it’s just how it is. Take a moment and remember that an extra thirty seconds is not going to kill you and that this is part and parcel what you signed up for.

7. Talk to other people

When travelling as a couple, it can be harder to meet people. Double rooms are often as cheap as two dormitory beds, so you’re not always in a room full of people forced by sheer proximity to make friends. You’re also not a singleton on the pull, so the lure of a cosy restaurant is just as great as that of a rowdy bar. Making an effort to pick up friends as you go provides a break from only ever talking to each other.

Rob with Ivan, our new friend from Medellin, Colombia and an affable police horse

NB: This works both ways. Sometimes single people can be lonely or vulnerable. Inviting someone to join you for a drink could be the difference between them having a fun night with new people or falling victim to the bad guys.

This is limited by the bounds of safety. If you’re in a fairly dangerous part of town, you may be better off sticking together. Still, when you’ve been in each other’s pockets for days on end, going solo to a market or even taking separate day trips can be a blessed relief. Not only that but you may find that you really miss each other after the time apart, making for a happy reunion that ultimately strengthens your bond. 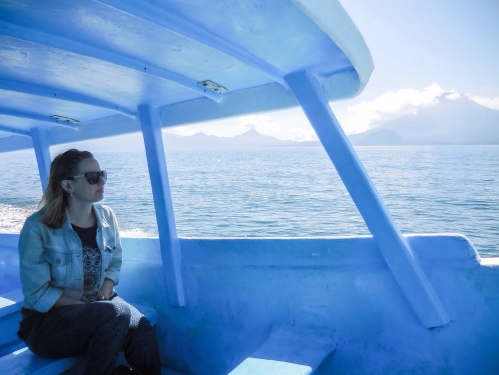 Franki heads to Santiago Atitlan, Guatemala, while Rob lies groaning in a hotel room, poleaxed by a stomach bug

9. Don’t be scared of downtime

Alright, you’re only in Colombia/Rwanda/Laos/Rhyll (delete as appropriate) for two weeks but that doesn’t mean you need to spend every waking hour trawling round another temple that looks a lot like the last one. Taking the odd day to chill out, recharge and laze about can be crucial for bringing you down off the peaks of tension that can easily fuel flashpoints between you.

10. Look after each other

It seems obvious but it matters. A lot. You’re not the same person. Sometimes one of you will be feeling bored, anxious or ill, while the other is in high spirits. When you’re ill in particular, it’s a huge help to have someone who is prepared to nurse you, mop your brow, hold your hair back or just go out to the pharmacy to get triple-strength prescription meds not available at home. It’s also the little things. It’s the helping hand when getting off a slippery boat while carrying a backpack. It’s keeping an eye out for the bandito sizing up your partner’s camera while they take that perfect shot of a colonial balcony. And it’s simply knowing when to shut up, or to speak up, whatever works for your loved one at the time.

So there they are, our ten tips for how to ensure your relationship survives spending month after month in the constant company of your other half. If you make it out the other side, you know you’ve found the right one!

The hubris of this post is not lost on us. Fingers crossed we’ll be this happy together after another ten months