What we did and what you can do too…

Eat: Steak (with apologies to our vegetarian brethren)

Seeing the ropy-looking cows moping around the Nicaraguan countryside might not get red-blooded carnivores slathering but the beef mostly comes from Argentina. What’s great about Nicaragua is the way they cook it. Judging by the tenderness of the Churrasco we tried – for instance at El Zaguan in Granada – they marinade for a hell of a long time. Grilling is the method of choice and they do it to perfection. Tuck in.

Drink: From a volcanic waterfall.

The Cascada San Ramon – on the double volcano island of Ometepe on Lake Nicaragua – is a must-see. It’s quite a hike to get up there, just an hour and a half but in sweltering heat and through steep jungle hills. But once you’re there, you’re greeted by a beautiful waterfall plummeting hundreds of feet into an icy pool.

Be brave, wade out into the waterfall and you’ll get a cooling shower and you can fill your bottle with pure, refreshing water from the lake that fills the crater of the Maderas Volcano.

Most tourists in Nicaragua have a go at volcano-boarding, whizzing down volcanic ash at speeds of up to 50mph. Ashamed to say we didn’t find the time to do it but by all accounts it’s exhilarating. Nicaragua has plenty of adventure sports opportunities for thrill-seekers, from surfing in San Juan del Sur, diving in the Corn Islands, ziplining, sailing, hiking, climbing, kayaking and swimming in the crystal clear water of the volcanic Laguna de Apoyo.

Buy: As little as possible.

Nicaragua is very cheap for the most part but the relatively small tourist numbers, compared to the likes of Guatemala or Costa Rica, mean the trips you’ll want to do (to volcanos, lakes and islands) are pretty pricy. So if you’re on a budget, best to save your Cordobas (dollars are accepted nearly everywhere too) for experiences you’ll never forget, rather than souvenirs you’ll probably lose.

Do: Rent some wheels on Ometepe island.

Mountain bikes, motorcycles and quad bikes are the way to get around on Ometepe, where taxis are not cheap. Between the main towns, the roads are pretty good, so biking (motor or push) is great fun. For everywhere else, there’s quad bikes.

We found this was the cheapest way to get to the San Ramon waterfall. Not only that but it was damn good fun too. Watch out for cows.

Don’t: Be surprised if there’s someone else in your taxi.

The cab stops, you start to get in, then you notice there’s someone else sitting in it already. It’s not another customer but the driver’s pal or relative. This happened pretty much every time we took a cab in Granada. Might be a bit odd if you’re used to the cabs of London or New York but hey, the more the merrier.

Go for dinner on the Calzada – the touristy strip coming off Granada’s Parque Central – and you’ll be pestered by a cabaret of different street artists and hawkers, with mixed abilities. By far the most bizarre was a troupe of masked people in tight dresses, most of whom were men or young boys. They appeared out of nowhere and started aggressively twerking at people trying to have their dinner. This was accompanied by an abysmal marching band who all seemed to be playing a different tune. Meanwhile a sort of gangmaster Fagin stood by our table muttering sinister oaths in a bid to make you pay up. We didn’t.

Not for nothing do they call Nicaragua the Land of Lakes and Volcanoes.

A chain of volcanoes runs down the Pacific side of the country, seven of which are active. Of the extinct ones, many have since filled up with water, creating beautiful crater lakes. The combined surfaces of Lake Managua and Lake Nicaragua make up almost 10 percent of the country’s total area.

But in the limited time I spent in Nicaragua, this combination of opposing forces – water and fire – seemed to me to have a significance beyond accurately describing the local geological features.

It is, after all, a country with a coast on both the Atlantic and Pacific. On the Caribbean side, locals speak English creole. On the Pacific, surf bums and American retirees jostle for space around the crescent-shaped bay at San Juan del Sur. And all around them locals drop their S’s providing a marked change (and challenge) for Spanish-speaking tourists.

It is a land rich in natural beauty but with acute human poverty. It is a country that, in 1980, won a UN award after managing  to bring its literacy rate up from just 50% to 78% in just six months. But it’s also a place where children walk to school through piles of rotting, burning, often toxic, garbage (and not just the ones who live on the four square mile rubbish dump, La Chureca).

It is a nation that in 2012 passed a law to formally criminalise violence against women and then a year later scaled it back after religious organisations and men’s groups claimed it was discriminatory towards men and was leading to family break-ups.

Meanwhile all I kept reading was how beautiful the country was, how it had all the draws of Costa Rica without the hefty price tag. Everywhere I looked it was being described effusively as an  “adventure destination” on account of the huge array of outdoor activities on offer. This breezy summary seemed somehow to jar with everything else I’d read or heard about the country. But just as it’s possible to visit a country as a tourist without ever scratching beneath the surface, so it is possible to get bogged down in the political or social ugliness of a place and fail to see its beauty.

Much as I believe it is important to engage with the context in which you travel, I also think it’s important sometimes to let go and simply experience a place. Happily Nicaragua allows you to do both.

We didn’t initially plan on spending any great length of time in the country, barring a job I had set up in Managua. In the end we spent a week there. It wasn’t enough to do and see even half of what the country has to offer.

We did not, for example, make it to the beautiful colonial city of León, in the north. Nor did we hike its surrounding volcanoes, or have the chance to “snowboard” down them as many do at Cerro Negro. We didn’t get to surf at San Juan del Sur or go snorkelling off the Caribbean Corn Islands. But we did hang out in colonial Granada, rent quad bikes on Ometepe Island and stand beneath a 180 metre waterfall in the jungle. We swam in a volcanic lake, mountain biked to natural springs and even braved the toxic gases billowing out of the crater of Volcan Masaya in order to peer over the edge at the glowing orange lava.

Cooling off in the Ojo de Agua springs

But despite the easy comparisons, Nicaragua is not Costa Rica. And it is not even close to providing the kind of touristic infrastructure that would allow it to catch up with its wealthy neighbour.

Arriving in Managua around 8pm on a Friday we discovered that the public buses to Granada, just under an hour away, had stopped running for the night. Left with no choice, we took a taxi for $35 (£22). 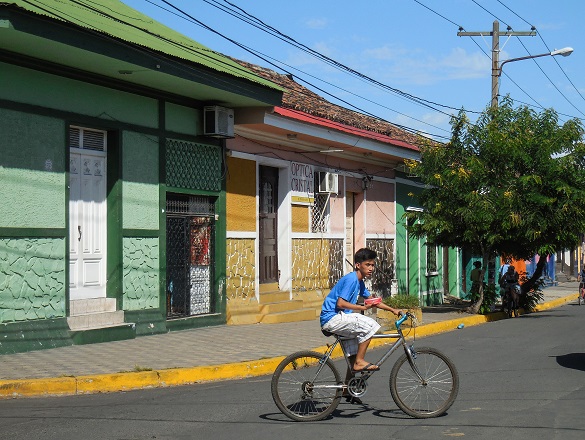 Based in Granada, I was able to get into Managua for work (the public bus costs around 25 cordobas or $1 each way but be warned, in rush hour it can take over two hours) and it allowed us to spend the weekend sightseeing. However, once again we discovered that the means of doing so were limited and the prices were significantly higher than we’d been used to.

Day trips, for example, are surprisingly costly. Having paid a mere £13 ($20) each for our entire day out in Semuc Champey, Guatemala, we were more than a little bit surprised when our combined visit to Laguna Apoyo and Volcan Masaya racked us up a bill of £40 ($60) apiece. And yes, technically you could take the public bus to the entrance but you would then be facing a bit of a trek as both the lake and the volcano are situated several miles in from the main road.

This is largely to do with demand. Statistically Nicaragua is the safest country in Central America but despite this it welcomed 1.2 million travellers in 2013, compared to almost 2 million in Guatemala and 2.4 million in Costa Rica. Consequently it cannot access the same economies of scale, i.e. no group discounts. When we booked the Apoyoa/Masaya tour we were the only two people on the list. The travel agent promised that the more people signed up, the cheaper it would be. No one else signed up.

It isn’t just the organised trips either. Travelling between places was more difficult than we’d found elsewhere. Sometimes all this meant taking a public bus (or three) and what this lacked in convenience it made up for in cost. To get from Granada to Puerto San Jorge, on the shore of Lake Nicaragua, we took a bus from the main bus station behind the market on Calle Atravesada. For around 30 cordobas ($1.20/£0.80) each it took us to a junction somewhere outside Rivas. Here we were herded off and onto a second bus where we paid a further 10-15 cordobas to travel the remaining ten minutes or so to the port. We spent the entire hour-long journey standing up, wedged between a backpack and man selling bags of nuts but it cost us less than a fiver.

But sometimes the road less travelled is less travelled for a reason. On Ometepe – an island made up of two volcanoes, one active, one extinct, linked together in the middle of Lake Nicaragua – we were quoted £50 ($70) for a taxi to take us just a few miles from our hostel on Playa Santa Domingo to the bottom of the San Ramon waterfall trail. Aghast, we said we’d take the bus, only to be told no local bus would be passing that morning. The only other option, we were informed, was to rent a quad bike or a motorcycle for five hours at a price of around £30 ($55) plus gas.

Filling up the tank, Ometepe style

We allowed our arms to be twisted, assuming we were paying the price of being a captive audience. But then we saw the roads. I’ve driven on dirt roads before but this was something else: great muddy ruts, deep puddles, huge churned-up piles of rubble such as would ruin any normal car. Suddenly that £50 taxi fare seemed completely understandable.

It ended up being one of the best days out we had in Central America. Sometimes when plans go awry you end up having even more fun.

Nicaragua is where I learnt to expect nothing and embrace everything. We missed a ferry because we were told three different departure times by three different sources (internet, fellow travellers, locals) and had no idea who to believe. We stood at a bus stop in the midday heat only to discover the bus we’d booked had passed through two hours prior to the time indicated on our ticket. We were refused advance tickets for a bus that was “full” but when we happened to see it passing, we were able to not only get on but bag ourselves two plum seats.

In the land of lakes and volcanoes I learnt about the terrible disadvantages faced by so many but through my work I also met and spoke to the organisations working to try to change that. I saw the terrifying results of unequal access to resources but I also heard the inspiring stories of people who have overcome the odds.

I spent a morning swimming in the cool waters of Laguna Apoyo and the afternoon braving the heat at the crater of Volcan Masaya. And that’s the impression that will stay with me.