It took me less than four hours to fall in love with San Francisco.

Now, I know what you’re thinking: four hours isn’t love; it’s barely even a fling. But trust me, I have found The One. When you know, you know. You know?

First things first: the houses. From the grand Victorian architecture complete with gothic lines and details, to the bright colours and often elaborate means of access, these are truly my dream houses. 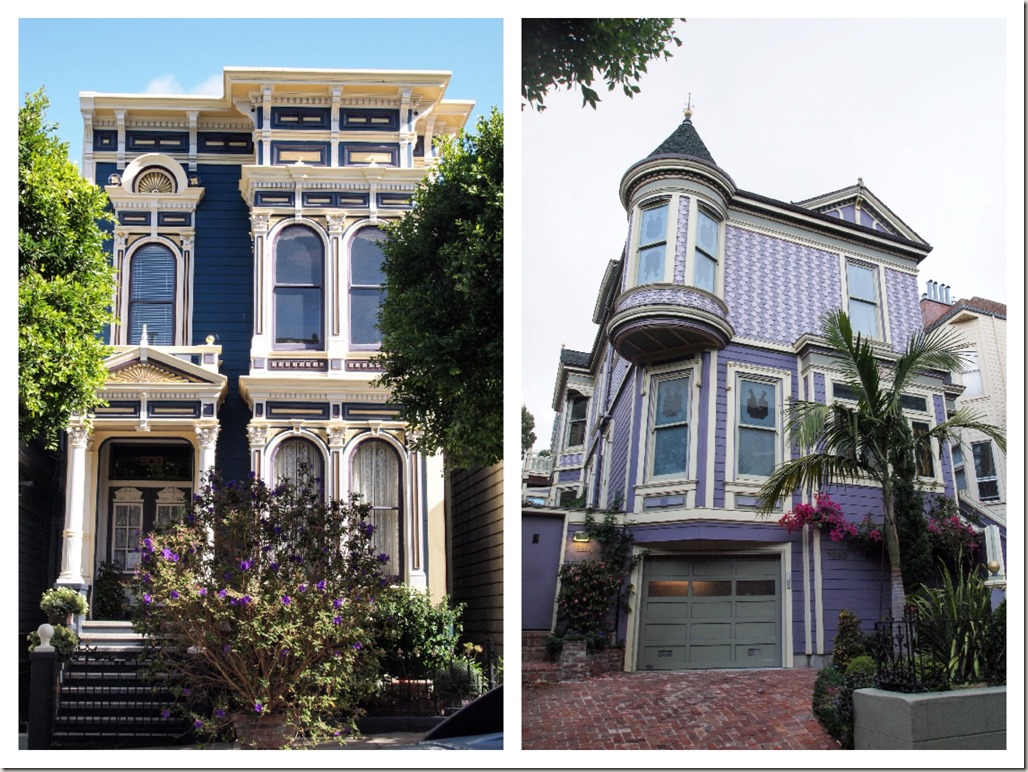 Parapets! Pediments! Turrets! Frankly, who wouldn’t want to live in one of these? And that’s before I even get to the steps! You see, ever since I was a little girl I’ve wanted a house with steps up to the door. Call me whimsical but there’s something about the notion of climbing up to your front door that I find romantic, even a little bit magical (I also wanted bunk beds – maybe I just have a thing about steps?) But in SF they take it to the next level [literally]. You can stand on the pavement and look up at a front door some six feet above your head.

But I know, I know. This isn’t love, it’s lust. And I can’t deny that San Francisco is a good-looking city. With the Bay on one side, Pacific on the other, mountains to both the north and south and in between the rolling hills of the city itself, it’s certainly a stunning location. But clean cut has never really been my thing. I like things a bit scruffier, a bit dirtier, a bit edgier. Luckily SF does that very well too.

It’s not a big city but each area manages to convey its own distinct style. There’s the Mission for hispanic architecture, fantastic food and also for any time you want to don your skinny jeans and drink craft ale while playing hangman on the blackboard walls (yup, we did this). There’s Haight-Ashbury for vintage shopping, stocking up on incense sticks or just whenever you need a hit of psychedelia (metaphorically, of course…), Russian Hill for when you want to ride a cable car up a really steep hill (which obviously locals don’t do but still, it’s there if you want it). There’s Castro for partying with your LGBTQ buddies… or eating really good cake (there are loads of bakeries), Fillmore/Alamo Square for when you just need to look at some really awesome houses (see above)… and of course the parks, the marina, the beach, the bridge. Ok, I’m going into raptures. I’m sorry, I’ll rein it in. Here are a few pictures while I collect myself: 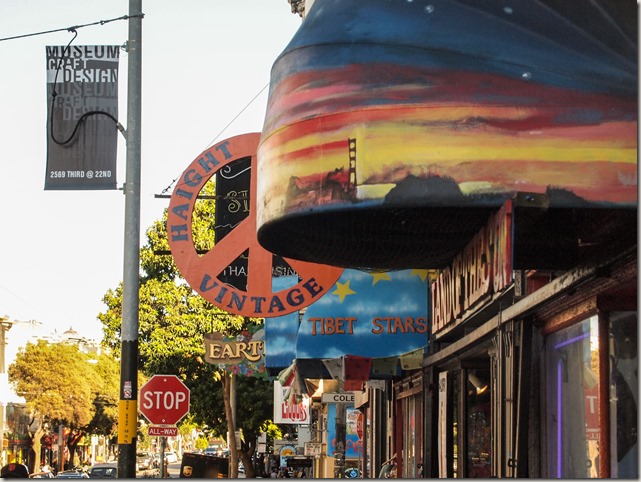 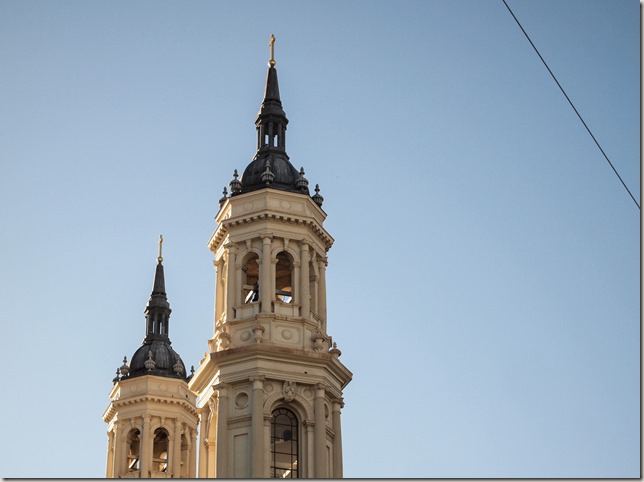 For me I think it was the cocktails with brunch at Nopa on Saturday morning, the fantastic shops on Haight Street (special mentions to Fluevog, Shoe Biz, and Piper’s Shoe Parlour), the oysters on the Embarcadero, the coffee (so much coffee), the bike ride over the Golden Gate Bridge, the rainbow streets in Castro, and the mosaic steps over in the Sunset district.

It really is a diverse and exciting place and because it’s small, it’s really easy to get around all these difference areas. The public transport is excellent. Buses run everywhere and yes, you really can hang off the side of a cable car if you want to (I’m slightly embarrassed to admit it because it is SO touristy but we did do this. In our defence we’d just had two very strong Irish coffees at the Buena Vista Cafe and there were no seats available so it seemed like a hilariously good idea.).

However, my favourite mode(s) of transport were the vintage streetcars that run up and down Market and round the Embarcadero. The trolleys and trams come from all over the world including Japan, Switzerland, and Italy. There’s even one from Blackpool apparently although I didn’t spot it. 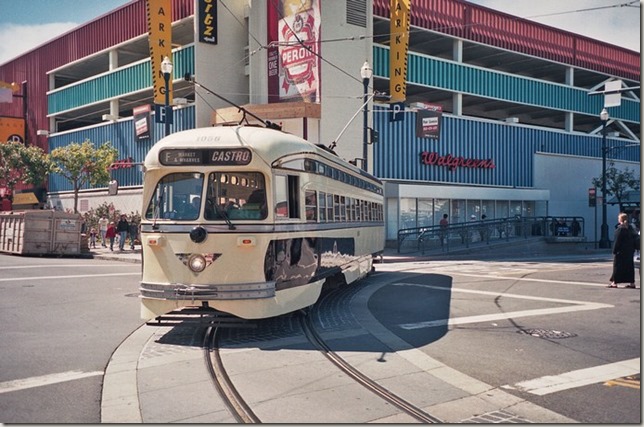 NB This is not my photo. I didn’t take any photos of the trams myself because I’m an idiot but here’s one of Rob hanging off a cable car like a boss: 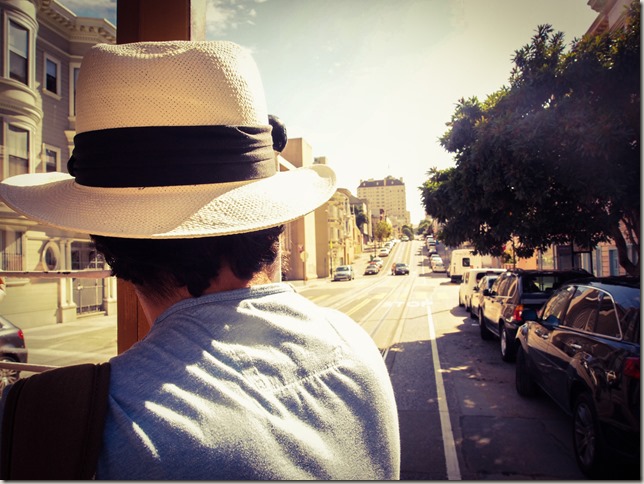 And here’s me being a bit more sedate on the bus:

(I’m not sure why I felt I had to provide evidence that we took public transport but there it is nonetheless.)

But you don’t have to bother with any of these if you don’t want because contrary to all my expectations, San Francisco is a bike city.

Honest answer? I don’t know. I do not know. I mean, I cycle in London which is not a flat city and where we live, just north of Camden, is at the foot of the highest hill in the city. It’s not steep but it’s pretty much uphill all the way home from town and the last five minutes gets me every time. But this all becomes meaningless nonsense in the face of SF. We hired bikes and although our route was largely flat I feel like I worked harder in one day than I would in an entire weekend of London cycling.

But now for the surprising part: I actually see this is yet another factor in SF’s favour. I love cycling and I already miss my bike. Yes, it would be hard to get used to but no one ever said relationships were easy now, did they?

The course of true love never did run smooth… much like the city’s cycle lanes.

But of course it’s not all pootling about in quirky shops and knocking back “drip coffee” in white-tile-and-sanded-wood coffee shops (although the latter are a BIG deal – so much so that I’m composing a whole separate blog on the subject). No lover is without their faults and to build a relationship is to understand and accept these faults, and even – where necessary – commit to helping find a way to work through them.

In the case of San Francisco I am referring, of course, to the huge homelessness issue. The traditional glib approximation is that these are people who blew their minds on acid back in the Summer of Love and never left. And while it’s certainly true that a lot of the problems stem from drugs (whether the long-term effects or the short-term dependence), it seemed clear to me that mental illness, learning disabilities and straight up poverty were playing as much of a role in keeping people disenfranchised as anything they might have inflicted upon themselves.

Successive mayors have promised to tackle it, some $1.5billion has been poured into projects designed to get people off the streets, but in 2013 there were still 6,436 homeless people in San Francisco (down from 8,640 in 2002 but up from 6,245 in 2005). This is about the same as the figure for London but bear in mind that London covers an area of around 600 square miles and has a population of some seven million while SF is about 230 square miles and is home to just under a million people.

It’s very difficult to write anything original or insightful on a subject which has, after all, been covered hundreds of times but I don’t feel I can ignore it either. It’s certainly something we were aware of before visiting the city and yet it still came as a shock to see that in a city as wealthy, as innovative, and as progressive as San Francisco, so many people appear to be slipping through the net. Still, if there’s one thing the city is not doing – and which many others around the world do on a regular basis – it’s turning a blind eye to their problems. And that gives me hope. 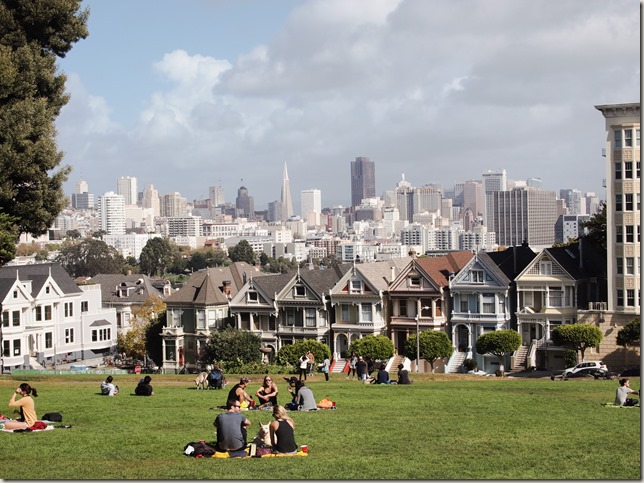 Rob talked about feeling inspired by LA’s can-do vibe but San Francisco was where I really felt like anything (uphill cycling notwithstanding) was possible. I’m still reasonably sure if I sat in one of the city’s excellent coffee shops for long enough, I too would come up with a brilliant app or social networking idea. Surrounded by so much inspiration and innovation, I couldn’t fail to, could I?

Whether it’s to do with having Silicon Valley down the road, a long history of firsts for liberal politics, not least where gay and lesbian rights and representatives are concerned, a colourful legacy of arts, music, and creativity more generally, or being the cornerstone of the free love movement, you really do feel like you could do anything or be anyone here. And not in the grubby, covert way that London (the voyeuristic minx) lets you be anything or do anyone, but in an open, breezy, composed kind of way.

Yes, composed. It might be buzzing but there’s something very calm about the SF vibe. It’s a city that knows who it is and is comfortable in its own skin. And I almost feel… I almost feel if I lived here I too could be calm.

And when the initial heady excitement wears off, that, my friends, is the stuff that true love is built on. 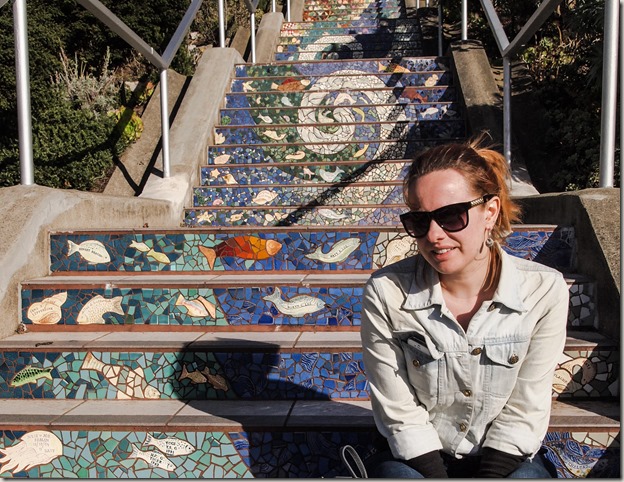 No, seriously. This is what I look like when I’m deliriously happy.