We were due to arrive in Salento around 4pm. At 3.55 the storm that had been threatening all afternoon, as we made our way through the Antioquia countryside from Medellin, broke.

Hauling our already-drenched backpacks onto our shoulders, we splashed across the flooded street into the tiny tourist office where we stood shivering until someone was able to call us a cab. I say “cab”. In Salento local taxis come in the form of 40-year-old Jeeps.

Nestled in the Quindío hills and the heart of Colombia’s coffee country, Salento is tiny, scruffy, but oddly charming. The whole place seems to move at an appealingly slow pace and the colonial architecture in the town square and its surrounding streets add a touch of vibrancy to this sleepy town.

Outside the centre it’s fair to say the rest of the town is plainer and more functional. Fewer than 8000 people live here and they work in agriculture, tourism, and of course coffee production.

But the countryside that surround the town is breathtaking and that, after all, is why we’re here. 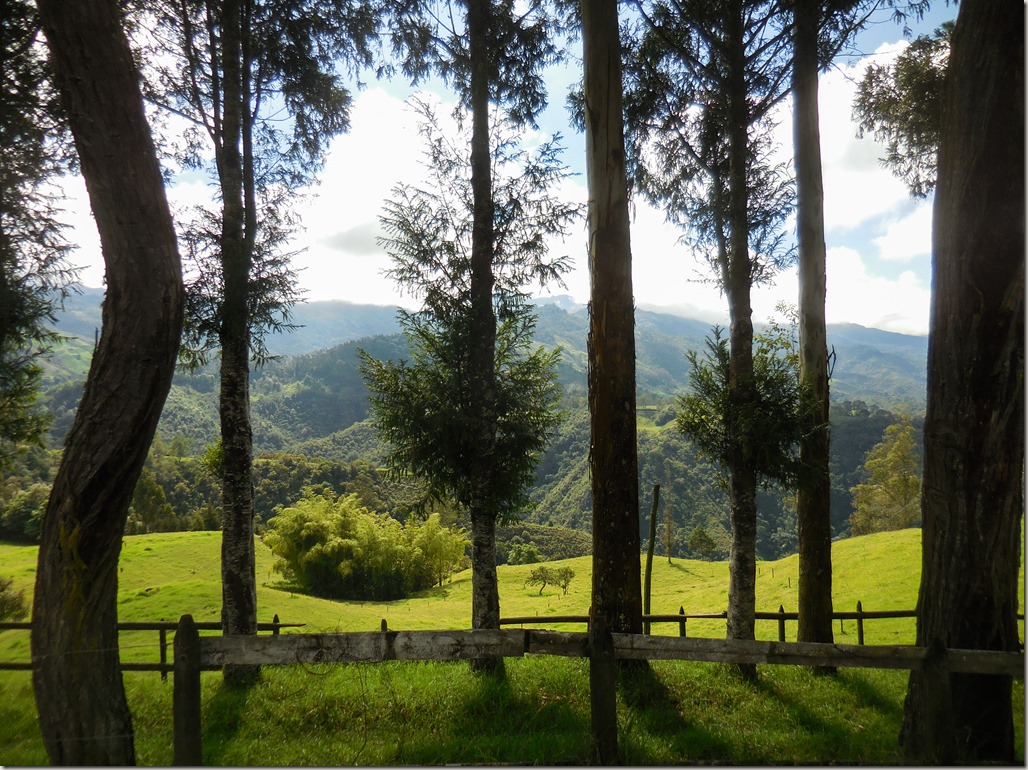 We arrived dripping wet at La Serrana, our farmhouse-style hostel, where they have hot showers (our first for a while). The cosy common area, filled with solid furniture and agricultural curios, was a welcome retreat from the thundering weather and we were only to happy to settle ourselves in for the evening.

People, ourselves included, come to Salento for two things: coffee and palm trees. We started with palm trees.

Nearby Valle de Corcora is home to the world’s tallest palm trees. A looped walking trail that takes you through the lush valley, up into the hills, reaching altitudes of 2400 metres, and back down again. It takes around five hours.

We took a jeep from the town square around 11am, arriving around 11.30. The last jeep back was due to leave the valley at 5pm. Which gave us exactly five and a half hours. Time to crack on.

The route is not so much a walk as a scramble. It’s muddy, rocky, jungly, steep, wet and in parts you’re following the river so closely you’re practically in it. On our way up we passed a British family with two boys under five. At least two of the party were wearing sandals. I will never know how they managed it.

Oh, and did I mention the dark clouds were starting to gather again?

Still, we weren’t going to be discouraged. We had heard there was a hummingbird sanctuary at the top where they also (and perhaps most crucially) served drinks and lunch. 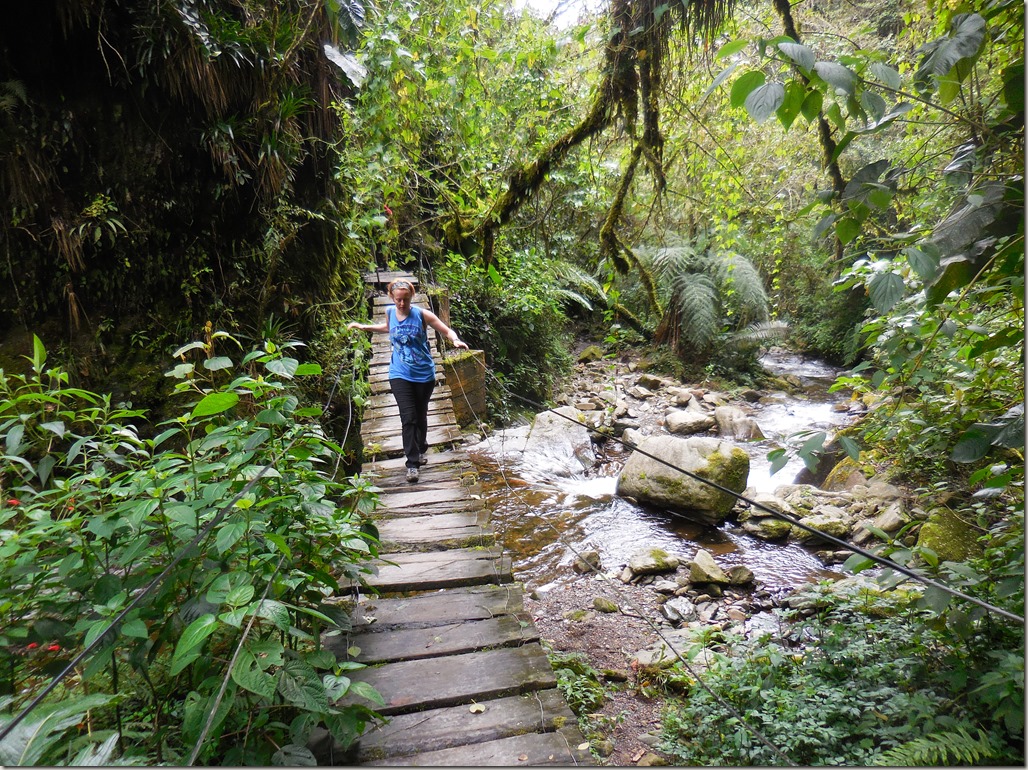 We clambered over boulders, scrambled up muddy banks, lost our footing on several occasions and once, while balancing precariously on a tiny strip of path between a barbed wire fence and a muddy trench, slipped and accidentally grabbed a handful of spikes.

From the start of the trail to the hummingbird sanctuary took us just under two hours and after the uphill climb we were looking forward to sitting down for a hearty lunch.

Except it didn’t quite go like that. The “hummingbird sanctuary” is actually the home of a canny local woman who has put out bird feeders filled with agua panela  or sugar water to attract wildlife. And “lunch” is whatever she has in her larder to sell. By the time we arrived at almost 1.30pm, the cupboard was  virtually bare. Options included a single chorizo sausage, mugs of hot chocolate and some agua panela served with cheese (pretty much as revolting as it sounds). We said yes to everything.

As we sat down to pick at our meagre meal, we saw there were two hikers already there, finishing off what was clearly the last of hummingbird lady’s reserves.

“I’m done with mine, you’re welcome to finish it if you like,” said one, pushing a quarter of a plate of seasoned rice towards me. I am not in the slightest bit ashamed to say I took it. And I’m not embarrassed to admit the world looked a lot better after that leftover stranger-rice. Plus, there were hummingbirds. 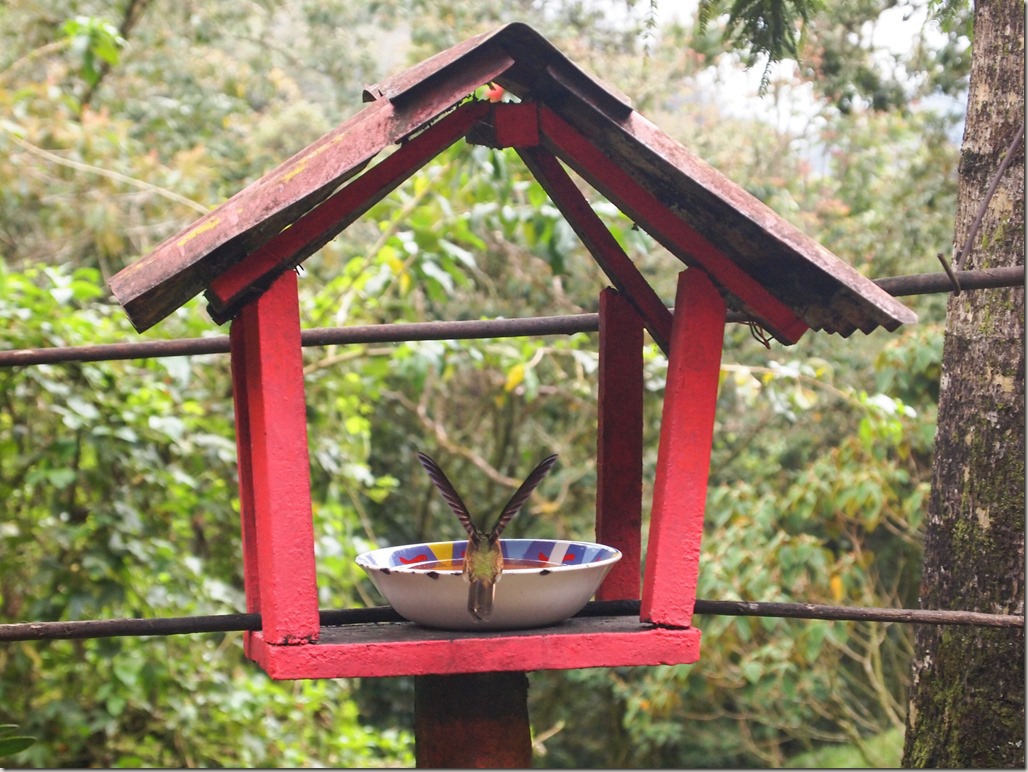 On the way back  towards the trail we bumped into the British family with the kids, still climbing, the younger of the boys now riding on his dad’s back.

“Is it much further,” the dad asked. We assured him it was not.

“And can we get drinks there? Lunch?”

We hesitated, unsure whether we had the heart to tell them.

And so with happy cries of “Hot chocolate! Hummingbirds!” they continued on their way. We, emboldened (and a little humbled) by the enthusiasm of these two tiny humans, scrambling through the Colombian jungle spurred on only by the vague promise of a hot chocolate, decided to hike on and climb to the top of the hill.

The Valle de Corcora trail begins at the road. You can start in the valley, as we did, and scramble up alongside the river, making a 1.5km detour to visit the hummingbirds, before climbing the final, steep, kilometre up to the finca (farmhouse) on top of the hill. From the finca, the walk down to the valley is an easy two-hour descent down a dirt road with breathtaking views along the way. Alternatively you can do it the other way around.

If you’re not much of a hiker, I’d very much suggest you do the latter because that final climb is killer. Also the breath-taking views are very much cloud-dependent. 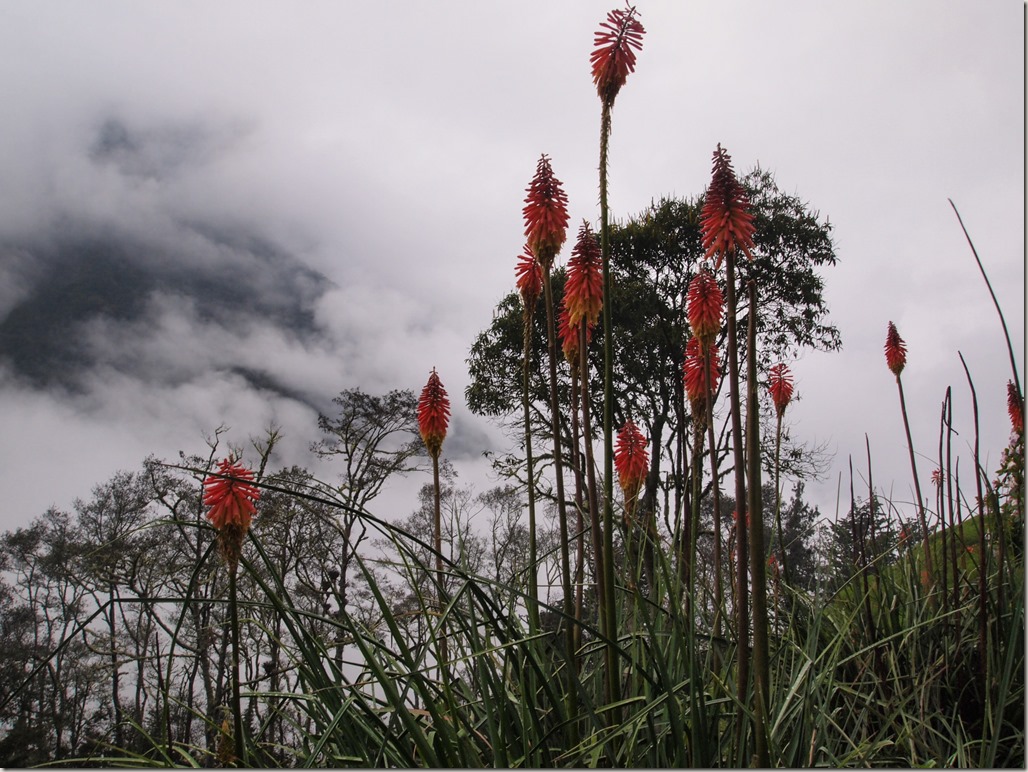 Hmm. That said, there’s something wonderfully spooky about catching your first glimpse of the famous palm trees through the rolling fog.

Valle de Corcora’s wax palms are the tallest palm trees in the world. Up to 60 metres high, they seem barely possible as they sway over the lush landscape. The effect is almost fantastical, like a set from a science fiction movie.

“At any moment,” said Rob, reading my mind, “we’re going to see a brontosaurus lurching towards us.”

As we descended out of the clouds, our surroundings became clearer and the verdant, mist-soaked hills rose up before us, studded with these amazing trees. 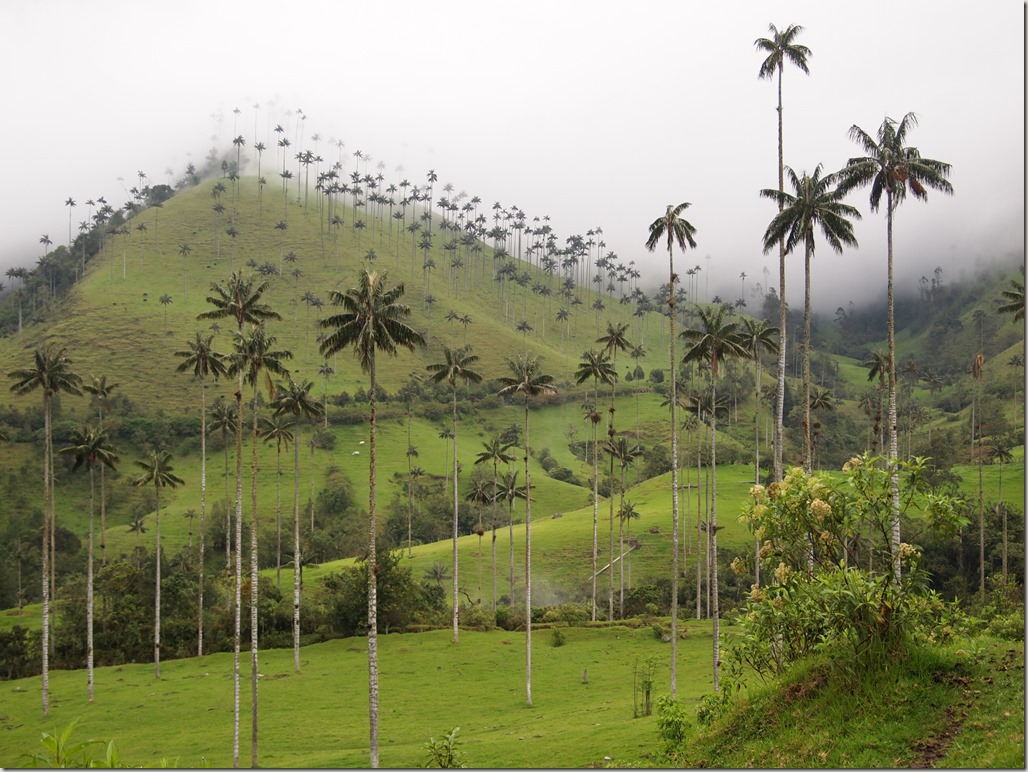 Towering above and around us on every side, they were every bit as breath-taking as we had been promised. Naturally, I took about a hundred photos but I’m going to be very self-restrained and only post one more…

It was difficult to drag ourselves away. But the last Jeep back to Salento was due to depart and we had to go. We made it back to the road with fifteen minutes to spare.

The following day we went to visit a local plantation. Like many tourists, we had flocked to the area in the hope of sampling some of the purest, freshest Colombian produce, close to source.

Yes, as stoners to Amsterdam, so we came to Salento in search of coffee. Our hostel recommended the Finca Don Elias but be warned, the sign is hard to spot and the farm next door does a good line in nodding and smiling at confused visitors as they usher you in to their tour. Just so you know for sure that you’re in the right place, here’s the man himself, offering us bananas which he grows among the coffee plants to act as a pest-deterrent.

The plantation is entirely organic, as it has been since they started business when Don Elias was a young man. Banana, mango and pineapple trees provide shade while their fruits attract bugs away from the coffee and provide sweet compost for the soil.

Beans are picked by hand, and shelled using a hand-cranked machine. They are then laid out in a makeshift tarpaulin greenhouse to dry and roasted in great pans on top of the brick oven.

And if you want to buy a bag of coffee – which obviously we did – you also have to grind it by hand.

All that was left was to sit down and enjoy a cup of the stuff. There are pictures of me doing so but they’re not for public consumption. Let’s just say grinding coffee is sweaty work.

That evening we went out to sample Salento’s nightlife. You think I’m being ironic but let me ask you this, when was the last time you threw chunks of metal at a clay pit filled with gunpowder?

Tejo, the local pastime, involves arranging small packets of gunpowder into a “target” shape in the clay and throwing a 680g metal disc at this target. The gunpowder, as you would expect, explodes on impact and there are different amounts of points allocated depending on where on the target you hit. The pros (yes, really) throw from a distance 20 metres. We tried it from five.

I am and always have been terrible at all forms of sport so I don’t mind telling you I failed to trigger a single explosion. Rob, however, would like me to let you know that he got two direct hits. On the sidelines our new local friends barbecued meat and drank aguardiente  (a local aniseed liqueur) as though nothing in the world made more sense than to combine alcohol, fire, and explosive materials.

Finally, tired, tipsy and with the scent of gunpowder still in our nostrils, we made our way back to the hostel.

After three days in coffee country we packed up and were on our way back to the capital feeling as though we’d awoken from a strange and wonderful dream. Once again we’d experienced Colombia’s unique brand of magic… and, much like the coffee, it’s addictive.

2 thoughts on “Caffeine dreams in Salento”