Join us as we drive from San Carlos de Bariloche to El Calafate… and back again.

Read our other posts HERE:

A delay with the EccoPort (the Argentinian pronunciation of Ford’s “EcoSport” we quickly come to adopt) means it’s mid-afternoon before we depart. Luckily we don’t have far to go today.

As we pass Lago Guttierez, we catch a glimpse of Cerro Catedral where we hiked a few days earlier. About five minutes later we encounter our first stretch of shitty road, the edges ragged, the pot holes vast and crumbling. Better get used to this.

We arrive in El Bolson late afternoon and swim in the river as the setting sun casts shadows on the craggy rock faces.

Where we stayed: El Pueblito. A beautiful wooden farmhouse in the valley. Stay in an attic bedroom or a wooden cabañita in the garden. Breakfast included. Don’t leave without sampling the delicious home-baked bread.

After stopping for coffee at the delightful Cafe Paseo de Las Flores, we pick up a couple of hitch-hikers as we head out of town. Hitch-hiking is common in Argentina and if you’ve got the space, it can be a nice way to share in the Ruta 40 solidarity and to meet new people.

Matias and Aldana are students from Buenos Aires. They tell us they think there’s a feria asado (meat festival) happening in Cholila, a tiny village 30 km off the Ruta 40, so we go to have a look. We grab a choripan (chorizo hot dog) for lunch and browse the stalls selling gaucho-wear and mate cups.

South of Cholila the road snakes away, and the landscape starts to flatten out, grey gravel merging with the beige and brown of the low, dry hills. We pass a car with no front lights, no front bumper, and no licence plates. We realise the bonnet is tied on with rope. In Patagonia it takes a lot for a car to be considered unroadworthy.

In Esquel we go to the saloon bar at the Hotel Argentino. They have several taps but no beer and they don’t sell red wine. We’re too afraid to ask what they do serve. The place is dusty and deserted save for a couple of men who eye us almost as suspiciously as the barmaid. Down a dark corridor we can hear music and see lights. We can only assume Selma Hayek is about to perform a table dance. We glance at each other and run

Latin America is full of dogs but Esquel is on another level. On the walk home from dinner we find ourselves followed (read chased) by five strays. We glance at each other and run.

We’ve had our first wildlife sightings! Guanacos are small llama-type animals that graze on the otherwise empty steppe. Tiny ostriches called choiques (known as Darwin’s rhea) scatter as we drive past and if you look very carefully, you can spot armadillos scuttling across the road. 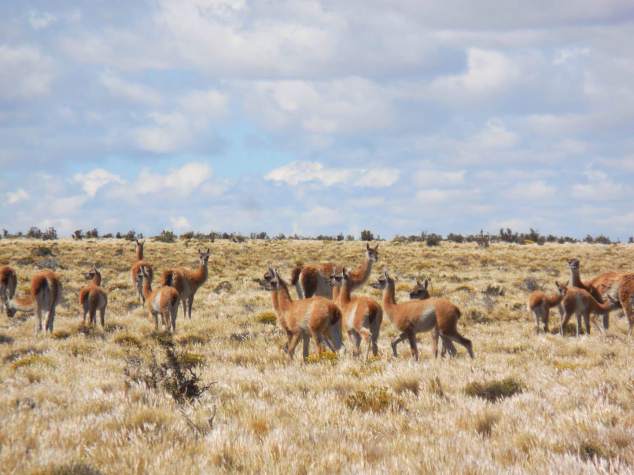 At Gobernador Costa the queue for petrol is round the block. Once filled up we find ourselves on a diversion. What’s going on? Oh, it’s just the annual fiesta del caballos. Of course it is.

The land is truly flat now; the sky is everywhere. The map we bought in Bariloche shows the names of the estancias (farms) along the route. We tick them off as we pass them. 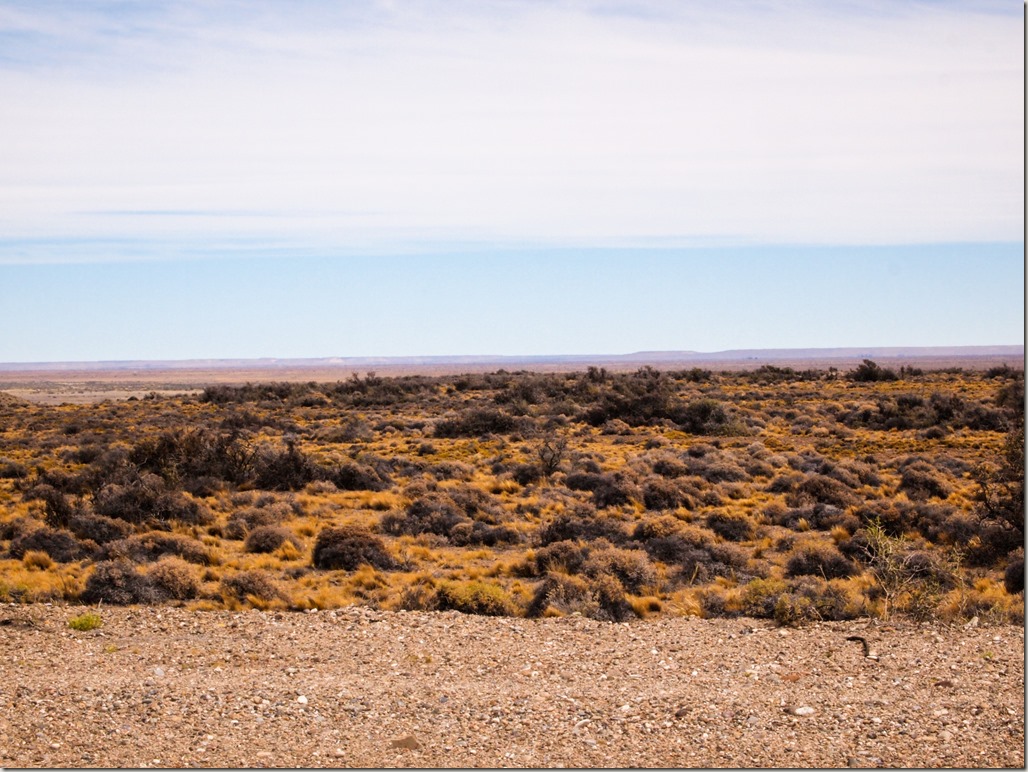 The road toward Rio Mayo is paved… after a fashion. The tarmac becomes more and more patchy until, finally, the sign we’ve been dreading: Fin del pavimiento. There are two stretches of ripio (gravel) today, each lasting us about 30 minutes. We drive carefully; it’s not as bad as we thought it would be.

It’s pretty empty out here. We’ve heard people flash their lights to say hello on the Ruta 40 so we give it a try. The oncoming car flashes back, the driver holding up his left hand in a peace sign. 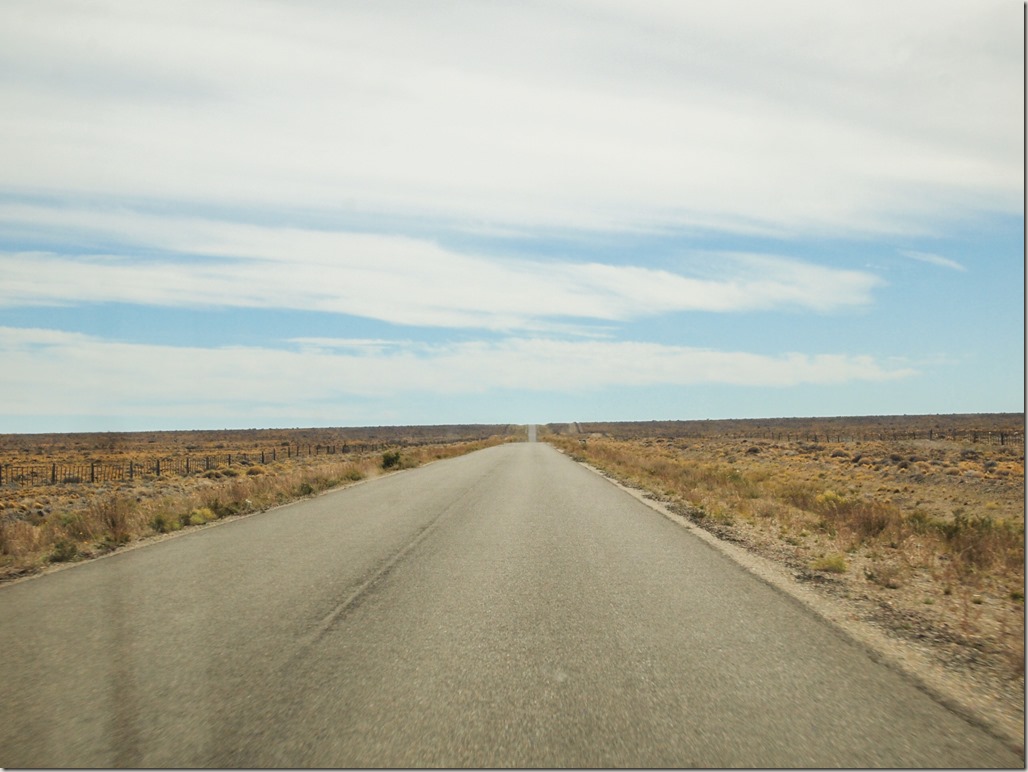 Hills rise slowly and almost imperceptibly out of the steppe. Every time you reach the brow you wonder if there’ll be anything different on the other side and every time it turns out to be more of the same. The winds are so strong we can barely open the car doors. It also makes peeing at the side of the road interesting.

At Perito Moreno we fill up the car before heading west towards Los Antiguos. Suddenly everything is green again. Lago Buenos Aires is magnificent, a shimmering plate of light under the evening sun. Man, it’s good to have a horizon again.

Where we stayed: Hotel Mora. A slightly sterile place on the eerily deserted promenade of Lago Buenos Aires. Wifi was useless but the restaurant did excellent lamb. Breakfast included.

Los Antiguos is the national capital of cherries but we can’t find any on sale. 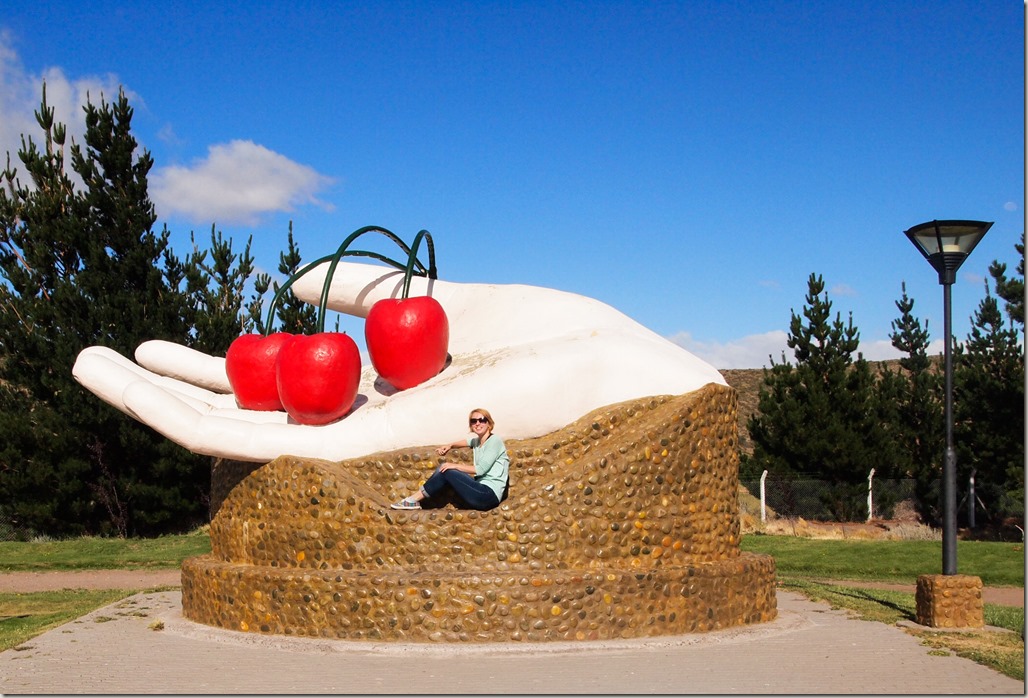 Instead we stop at the supermarket in Perito Moreno before heading south again. Around us the earth – which yesterday presented us with a medley of brown and grey – turns vivid orange. It’s unlike anywhere we’ve ever been before.

Beyond this the land opens up once again as far – no, further – than the eye can see. There’s nothing on the road but you can’t help straining ahead, into the haze.

“It’s as if you can feel the earth spinning,” says Rob. We decide it’s time to switch drivers.

The main event on today’s itinerary is the UNESCO site of Cueva de las Manos, a spectacular series of caves along the Rio Pintura canyon featuring 9000-year-old cave paintings. It’s 47 km down a gravel track but it’s well worth it to marvel at the primitive art. 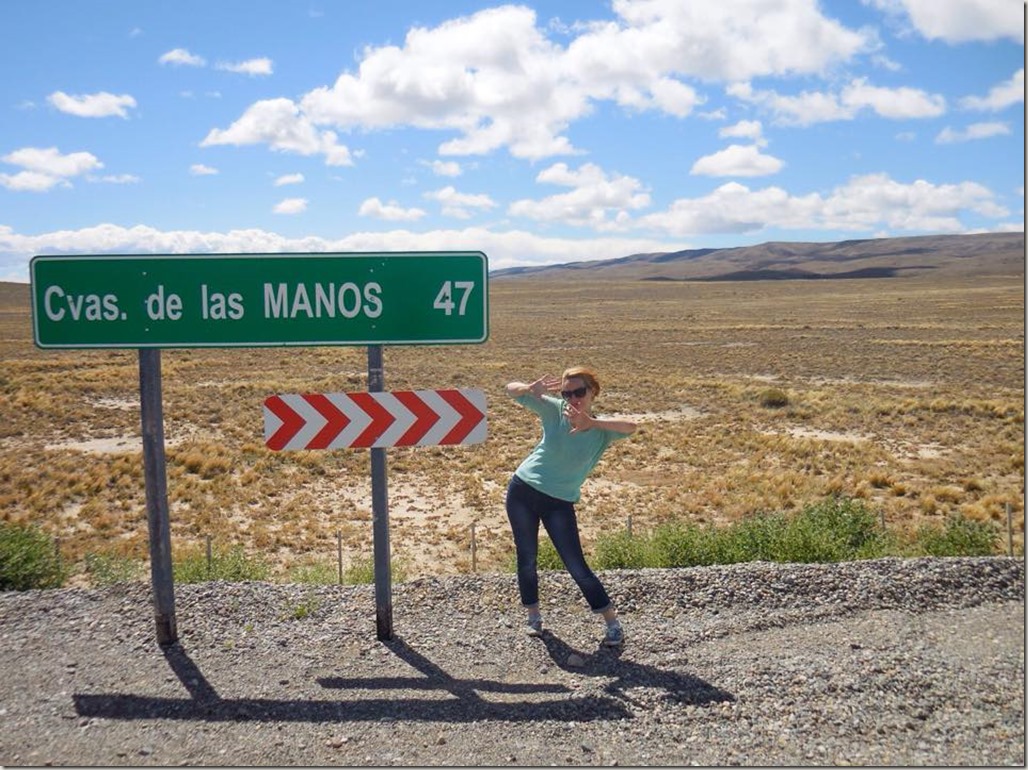 At Gobernador Gregores we run out of cash. There hasn’t been an ATM that takes foreign cards since Esquel and nothing we read warned us of this. We briefly anticipate spending the night in the EccoPort but the hotel owners come to our rescue when they agree to take our remaining 500 pesos plus the 15 euros Rob inexplicably has in his wallet.

The supermarket does not take “chip and pin” cards either so it looks like canned tuna and crisps for dinner. But what are we going to do tomorrow? Our next stop, El Chalten, does not have a compatible bank and the hotel owners can’t guarantee that places there will take our cards (even after ringing round a few of them on our behalf!). Thankfully the one thing we can pay for on card is petrol but right now it’s looking like we might have to drive all the way to El Calafate to get cash and then back to El Chalten.

Then, a miracle. The gas attendant comes to our rescue and offers to give us cash back when we fill up the car. “Unofficial,” he tells Rob meaningfully. But he lets us go back in the morning and do another transaction. Que buena onda! Everything’s going to be okay.

Where we stayed: Hosteria Kaiken. Pretty much the only place in town that’s on Booking.com. Old-fashioned smoke-stained rooms are made up for by generous, helpful owners. Tea, biscuits and crockery included.

It’s ripio time! It poured with rain last night so the unpaved stretch is now a churned up mess of mud and gravel. It’s like driving on Mars and we LOVE it. For just under two hours we bump and barrel our way over this extraordinary landscape.

Afterwards, getting back onto tarmac feels like flying. We stop for lunch in Tres Lagos, a village that seems to be largely inhabited by cats who stalk around the now-muddy EccoPort evidently hoping for leftovers. It’s so windy we can barely get out of the car.

As we approach the El Chalten turn-off we begin to make out the craggy mountain peaks in the distance. Then, finally, the view we’ve been waiting for… 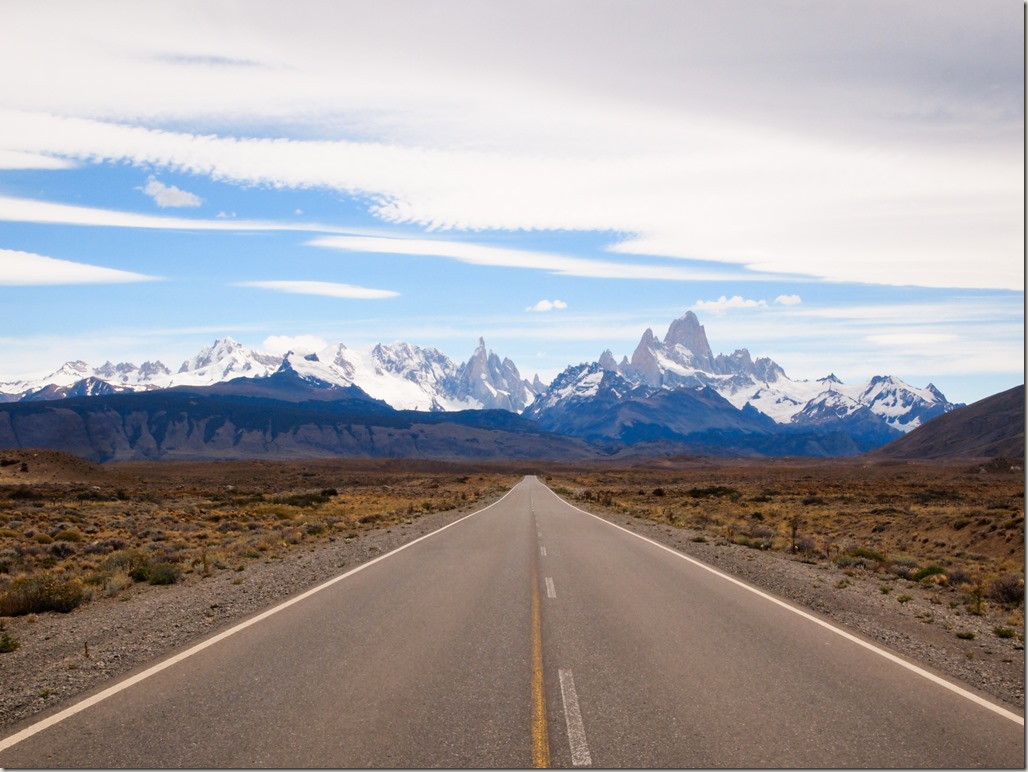 We’ll be stopping in the tiny but charming town at the foot of the Andes for two days to rest and hike some of the beautiful trails before continuing south to our final stop.

We’ve arrived! By now a three hour drive feels like nothing but nevertheless it’s exciting to finally be here. We’ve got a couple of days to explore and visit the incredible Perito Moreno glacier before we start the long drive back. 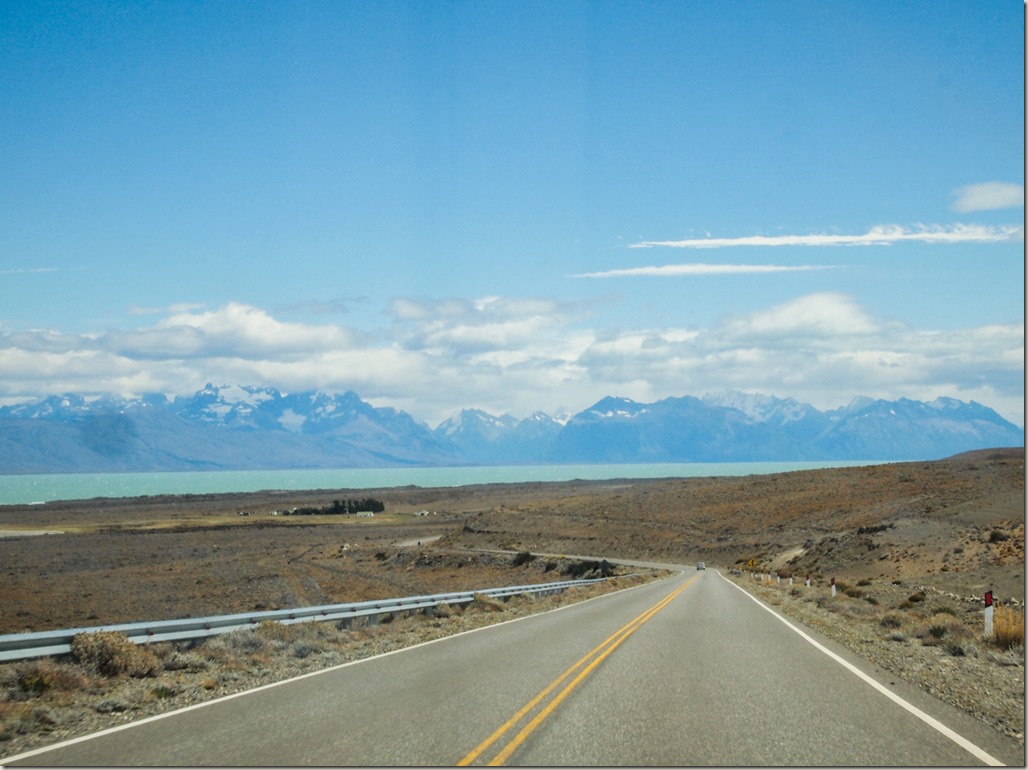 Where we stayed: Las Cabañitas. Adorable rustic cabins to make you feel like you’re living in a fairytale. Breakfast included.

The journey back seemed like it would be a breeze but believe me, it presented its own challenges! Click HERE to find out how we did it: Driving the Ruta 40: Our Patagonia road trip – Part 2 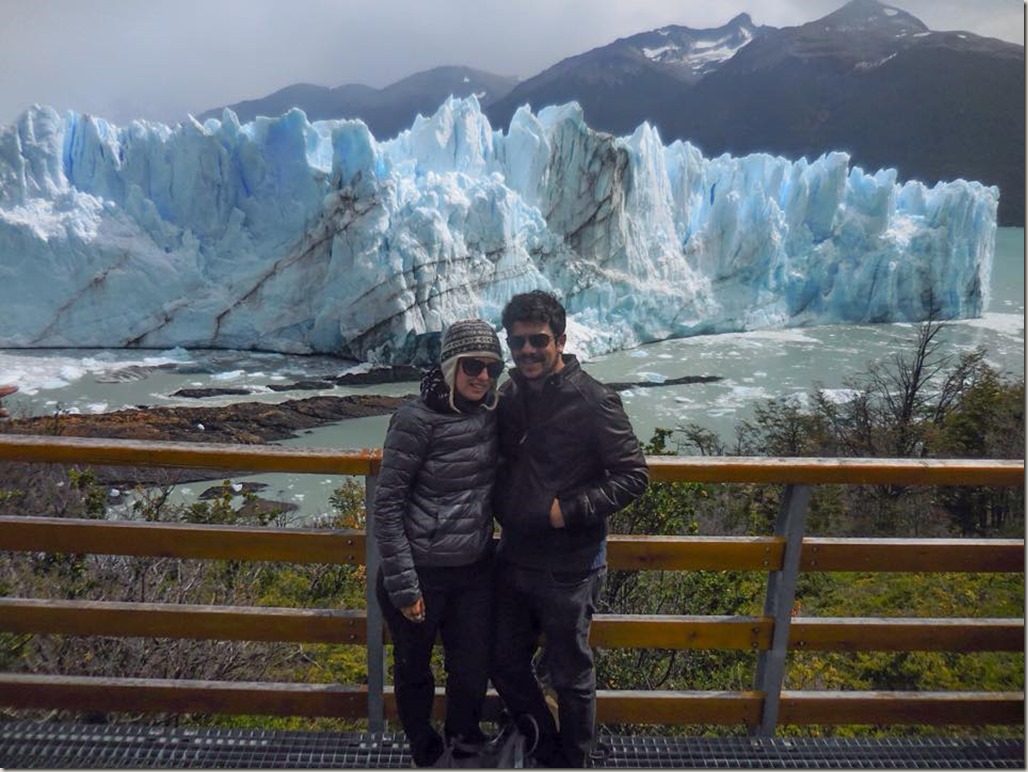