When you’re travelling for a year it can be hard to convince the folks back home that you deserve a treat. After all, isn’t every day a treat when you’re on the road, waking up every morning to visit new places and see new things?

Of course the answer is yes. But while backpacking is incredibly enriching for the soul, it is less kind to the body. And after two months of cold showers, communal kitchens and cockroaches it’s fair to say we were looking forward to spending Christmas somewhere a little more salubrious.

We arrive in Trancoso on December 23. It is a notoriously tricky place to get to. You have to take an overnight bus or fly from Rio to Porto Seguro, an entirely charmless resort just up the Bahia coast. From there it’s a ferry and two buses.

However, the night before (and as if to prove my point about the effect of backpacking on the body) Rob had been rendered unexpectedly immobile with excruciating back pain. After an attempt to hobble, wincing, out for dinner had ended, almost literally, in tears, we took the executive decision to fork out for a cab.

Perched on a cliff above miles of golden sand, tiny Trancoso is a slice of chilled out paradise on Latin America’s busiest coastline. After wealthy bohemians from Sao Paulo set up camp here in the 1970s, it quickly became a byword for rustic sophistication.

These days Brazilians flock here to spend the festive season in laid back bliss. And not just Brazilians. The week after we were there, Kate Moss and Naomi Campbell descended on the resort and sent the paparazzi into a frenzy as they frolicked on the beach.

Needless to say, upon arriving at the Capim Santo hotel, we feel conspicuous with our grubby backpacks and thrice-worn T-shirts. We needn’t have worried. The place is as relaxed as it is beautiful. Surrounded by leafy gardens, the rooms are housed in individual air conditioned cabins, their interiors a masterclass in laid back luxury. Whitewashed wood and pale tiles appear airy and bright while fresh white linens, sheepskin rugs and patterned bedspreads add texture and warmth. Voluminous mosquito nets hang lazily from the four poster bed and a colourful hammock on the front porch provides a final touch of hippy chic.

We try to play it cool as the staff show us around but inside we’re bursting with excitement: “There’s hot water! And a hairdryer! And air conditioning!”

Outside the hotel room, the shimmering water of the jungle-style pool is enough to produce an audible sigh.

“And this is the way to the Quadrado,” says the manager, pointing to a wooden gate.

The Quadrado is Trancoso’s town square… if you can call it that. The grassy lawn that runs up the edge of the cliff, is more village green than central plaza. A tiny 16th century church built by the Jesuits who founded the original settlement back in 1586. In the afternoons children play games on the grass while bronzed holidaymakers in flowing sarongs and colourful kaftans wend their way back from the beach. 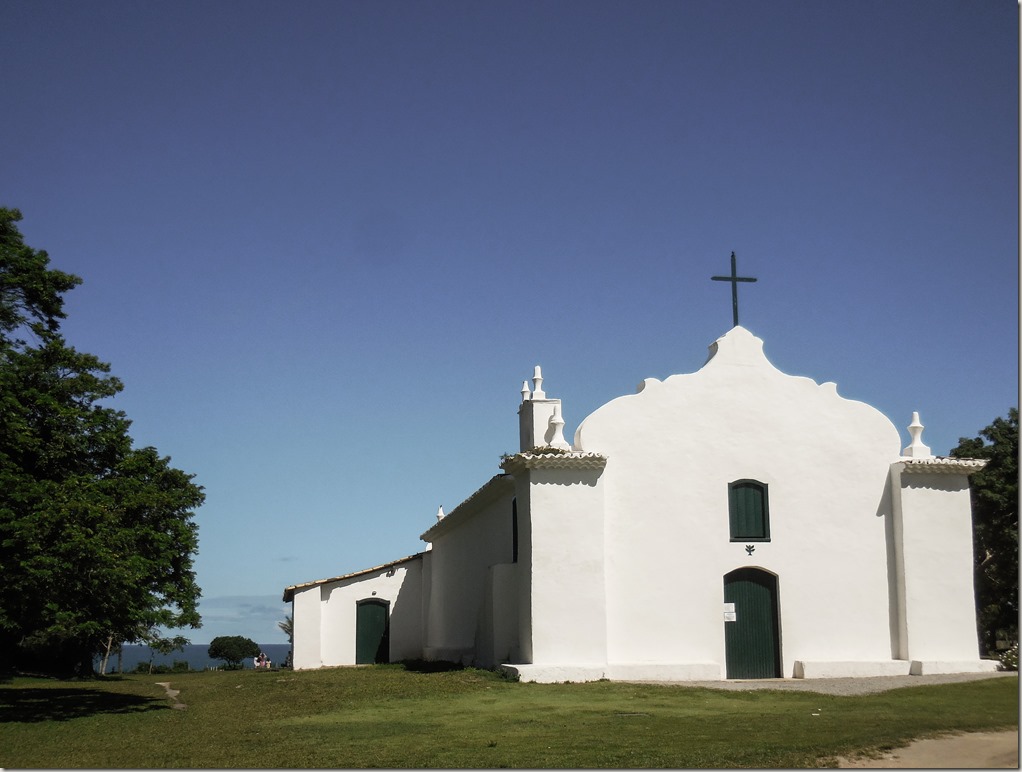 As the sunlight filters down between the leaves and tropical blooms, leaving dappled shadows on the colourful cafes, we feel as though we’ve stumbled into someone else’s good fortune, someone else’s life. 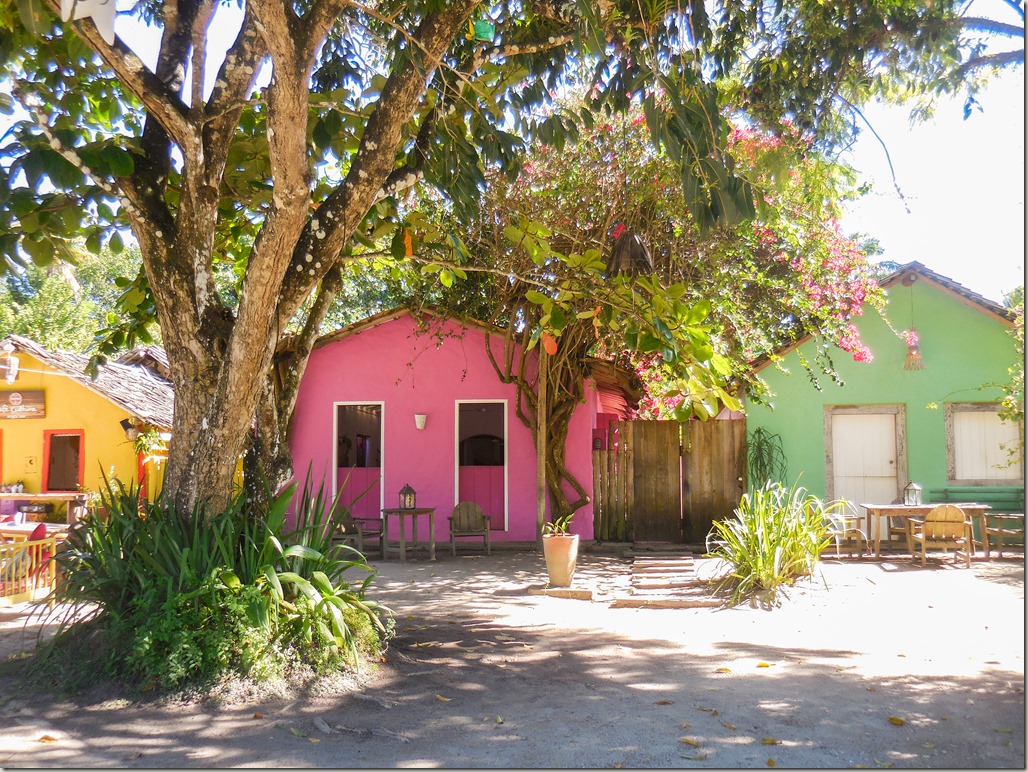 But if it looks heavenly by day, by night it is positively magical.

When the sun goes down the paths are laid with flickering tea lights. Around the edges, cafes, shops and restaurants string lanterns from the trees and lay out deck chairs and colourful cushions beneath the boughs. The sound of gentle music floats out from the twinkling bars. As we emerge for the first time from the dirt track that leads from the hotel, it is difficult not to gasp with delight.

And then there’s the shops. The tiny boutiques overflow with bohemian style with a Brazilian twist: raw silks, floaty chiffons and the silkiest satins, a riot of tropical shades and prints, and embellished with glittering beads. Even the swimwear has sequins on it which leads me to suspect it’s not actually intended for swimming (a beach party we witness while walking past one of the swankier resorts later in the week confirms this). However, you can forget about buying a souvenir. This is boho chic at its most exclusive and while I’m reasonably convinced I could pull off a sparkly pineapple print thong, I settle instead for a pair of Havaianas, bought for 25 Reais (£5.70/$8.70) in the supermarket down the road.

Beauty salon in a caravan

Christmas morning, when it dawns, is a characteristically relaxed affair. At breakfast we join the staff and other guests in wishing each other “Feliz Natal” as we tuck into fresh watermelon and slices of coconut cake. Then it’s time to hit the beach.

The local praia is a ten minute walk (or twenty minute hobble, if you’re Rob) down the hill from the end of the Quadrado, through the mangrove swamps via a small bridge, and onto the sand. 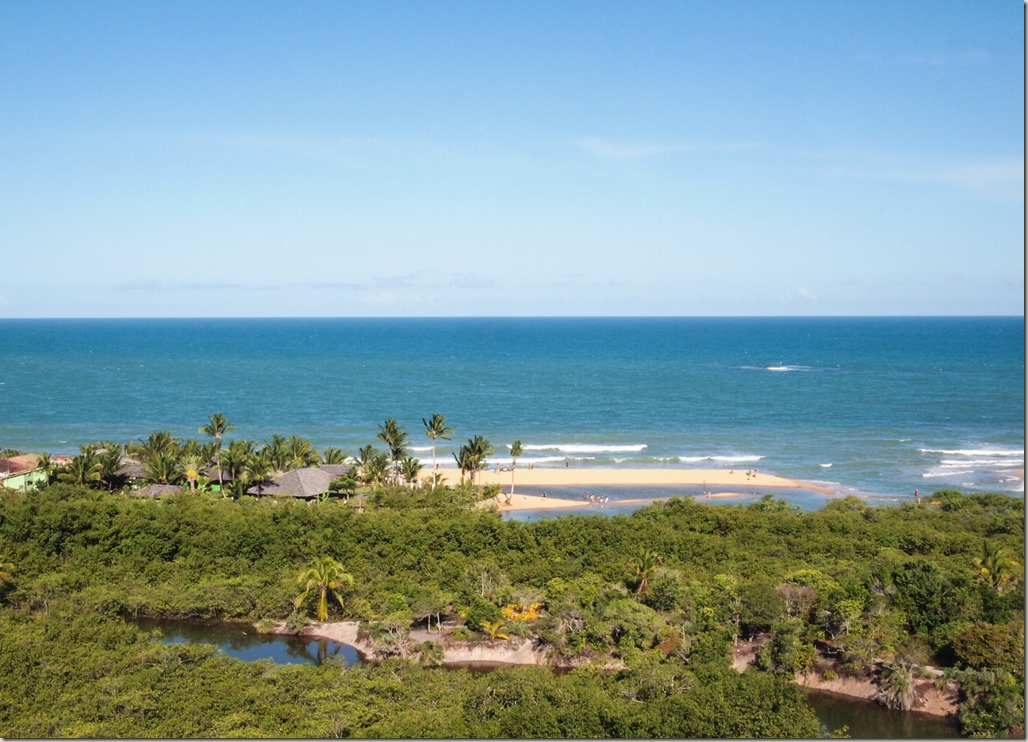 From this point the beach stretches out as far as the eye can see in either direction, backed by palm trees and punctuated with beach bars and restaurants which, for around R100 (or a minimum spend of the same) will rent you sun loungers and parasols. Given that this is our first time on the beach (apart from a couple of hours in Cartagena) since we started travelling, we are happy to cough up and while away the hours between swimming and sunbathing sipping ice cold beer and watching the locals have a kickabout on the golden sand.

In the evening we don our occasion wear (ie our cleanest clothes) and head out for Christmas drinks. We agreed weeks ago that we wouldn’t bother with presents, the trip to Trancoso being enough, but at the last minute we’ve decided to exchange small gifts. Giving ourselves a backpackers budget of R30 (£6.80/$10) we have tasked each other to go out and buy a surprise. Wrapped in leaves and toilet roll and sealed with gaffa tape they sit on the table in front of us as we sip our festive caipirinhas. It’s the moment of truth. Rob’s got me a decorated stone trinket box and a silver bangle. I’ve managed to find him a mini percussion instrument made out of a coconut shell.

For Christmas dinner we head back to the hotel where the restaurant is excellent. I have the lobster because if I can’t order lobster on Christmas day in Brazil, when can I? Rob goes for sea bass in a creamy nut sauce. We even manage to find a Brazilian white wine to go with it. True, there’s no Christmas pudding on the menu but somehow we manage to make do.

Feeling tipsy and giggly we meander our way through the gardens to our little cabin. It’s been a truly magical day. In a few days we’ll be back to drinking cheap beer in sweaty hostels so for now, let’s close the mosquito nets, turn up the AC and finish off this bottle of wine.

Dream catchers in the breeze…