Leave San Francisco with heavy clouds gathering overhead. It won’t be long before they break, chucking their contents down on us.

Our hire car is a Mazda 2. It’s not the sort of car you fantasise about in any context, let alone for one of the world’s top “drives to do before you die” or similar hyperbolic nonsense. It’s actually pretty good although there’s no sat nav. Which will be interesting.

The rain starts before we even reach the sea. At San Gregorio beach people have built driftwood bonfires in anticipation of the weekend’s Halloween festivities. “Poor fuckers,” sympathises Rob. The wood is drenched now and useless. 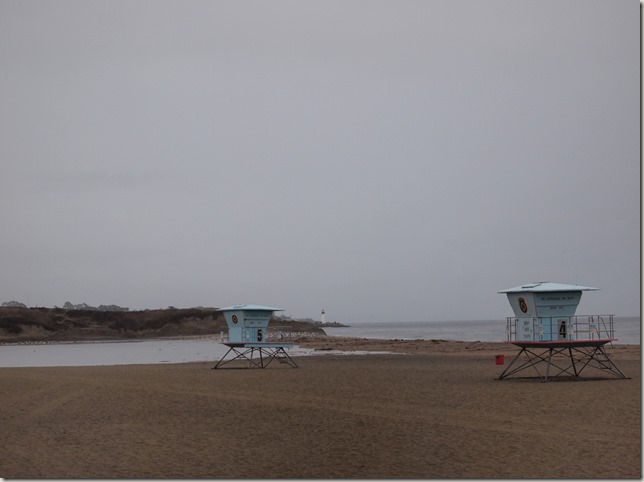 Stop at Half Moon Bay where we stand on rocks shiny with water and try to have fun. Take pictures of an interesting house with wood tiling and elaborate gables. A stone angel is built into the roof. “Are you sure that’s an angel? Looks a bit… pagan.”

There’s a sign out front: California Sun Centre for Wellbeing. We beat a swift retreat.

At Santa Cruz we park in a near-flooded lot and dash to the nearest cafe. Clothes beyond sodden. On the plus side, the sandwiches at The Picnic Basket are excellent.

Wander round the damp, deserted boardwalk taking photos of brash signs for cotton candy and tater tots, the latter of which is an entirely new concept to Franki. Brightly coloured fairground rides are backed by endless, billowing grey.

“It reminds me of a zombie movie,” volunteers Rob. “You know, after they’ve cleared the place out.”

Directly to our left a door slams. Two sets of skins are nearly vacated. It’s just a janitor.

Carrying on towards Monterey it’s Franki’s turn to drive. Six months as a licensed driver but why not? One has to take the bull by the horns.

The rain really gets into its stride now, hammering down on the windscreen, roads slick and treacherous. The grey and green of California’s most famous highway flashes passed, lit occasionally by the oncoming lights of a passing car. Gripping the steering wheel she recites stopping speeds in her head. 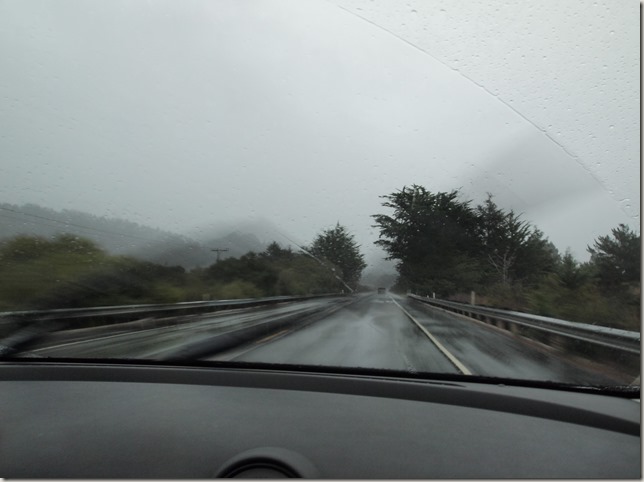 Arrive in Monterey around 5. Too cold, soggy, and miserable to do much. The town is in a state of costumed revelry. We go for dinner on Cannery Row. The food is plentiful but unremarkable. Somewhere some very poor live music is being inflicted on people. The bars have too much neon in their windows. Suspect this is not the future Steinbeck envisioned.

Cannery Row is like Disneyland for sardine fishing. It is still cold and drizzling.

At a bar in town we are served by Cruella de Vil. A non-specific superhero and an American football player with a bloody bandage round his head elbow their way past us and order two shots of Jagermeister and two Stellas. We go back to the hotel.

It’s still raining. We head out of town towards 17-Mile Drive.

Breakfast at the Monterey Hotel was minimal. Eat bananas on the beach instead. To make a California road trip look like a wet weekend at the British seaside is no mean feat.

On the saturated sand we snap pictures desolately. The ocean beneath the battleship sky ranges from palest turquoise to dark, brooding, petrol. The sea birds hold out their wings to dry. In vain, it seems.

Around mid-morning blue sky emerges; bright, hopeful patches between the still-dripping branches of the cypress trees. We drive on to Carmel-by-the-sea.

Pristine and perfectly formed, the town calls to mind a high-end ski resort. Everything is elegant and tasteful, everything you need is here. For a price. Also, there are evergreens.

We buy sandwiches in Bruno’s deli which will later be consumed high on the cliffs of Big Sur, overlooking the now glistening ocean.

By the time we reach the “historic” Bixby Bridge (built in 1932) the sun is out and the wild lavender that clings to the cliffs either side is fragrant and blooming. Sunglasses are on. Janis Joplin makes her way from Rob’s iPod to the car stereo.

Big Sur is everything they told us. Sweeping curves, precipitous drops, towering redwoods and shimmering cobalt water become our backdrop. Rob’s eyes are on the road but out of the corners he sees green and blue, green and blue. Sunlight flickers through the trees.

At Pfeiffer State Park we walk the path to the waterfall. Once it cut through the rock and dropped straight into the ocean but landslides caused sand to build up. Now it drops onto the beach. Like a natural shower. Like a fairytale grotto on a beach that cannot be accessed. 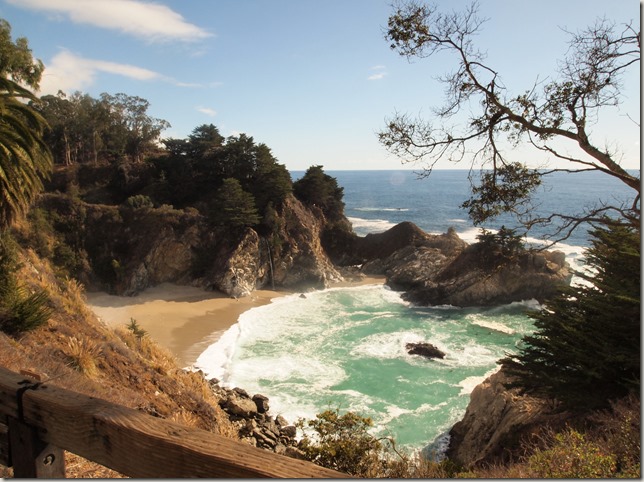 The elephant seals are just north of Morro Bay. We aren’t expecting them but suddenly there they are, dozens upon dozens, covering the beaches. The name does not mislead: they are huge. Against the sunset a pair play. Or fight.

Morro Bay is delightful. The Sandpiper Inn has bright green paintwork. This is not a criticism. We eat “naked” fish at the The Galley. It’s fantastic. It tastes of fish, a novelty, we’ve found. This country likes its salsas, its marinades, its spice rubs.

Fish eaten, wine drunk. We walk back to the motel, tired and happy.

Time to explore the wine lands. But first: coffee.

Stop at Pismo Beach. Out on the wooden pier we watch the surfers. Fishing rods lean against the wooden rail, their owners reclined in chairs. On the deck a pelican looks on hopefully as a man cleans and de-scales his catch. He is rewarded shortly. The man cuts off the fish head and flicks it in the air. The great sagging beak opens and closes on its prize.

Inland the picture looks like this, from front to back: road, vineyards, mountains. At Roblar Vineyard in Santa Ynez we eat sourdough pizza and work our way through six different wines. Not Rob, though. He’s driving.

Michael Jackson lived nearby. “Shall we go to Neverland?” Bit creepy. But why not?

The walls outside the front gates – you can’t see the house, it is literally miles away – are covered in the loving graffiti of heart-broken fans. “I miss you, Michael,” “I’ll never forget you,” “Your music was my life.” And this one, succinct but poignant: “I’m bad!” The security guard tells us, “Take as long as you need.” We get back in the car.

Solvang is an odd place. A Danish village in Southern California. Quaint chalets – or modern American notions of chalets – house supermarkets and pharmacies. We pass patisseries and delicatessens. There’s a ‘Hamlet Inn’.

Sundown comes at El Capitan State Beach. We clatter along the cobbles trying to capture the light, the colours, on our cameras. Give up and use our eyes instead. Fire blends into water. Sunset over the Pacific. We are as far west as we have ever been.

Drive into Santa Barbara in the dark. The white streets are almost unreal. It is a concept, surely, this place. An idea someone once had of the perfect beach town. Then they built it all in one go.

We have seafood again. It’s average. We drink overpriced wine in an awful bar with a fire pit. We return to the Agave Inn which has crisp white sheets and colourful Latin American-style blankets.

Breakfast is easily the best thing we do today and it’s over by 10.30.

Franki wanted a ‘proper American breakfast’. Jeannines does just that. We won’t need to eat til dinner time.

The highway runs through Malibu. The highway more or less IS Malibu. Houses stack up the hill on one side, beaches on the other. Drive into a canyon and up to a lake. Very beautiful and exclusive with absolutely nothing to do.

Rob likes the sound of a ‘lagoon’ so we go to Malibu Lagoon State Beach. Not the kind of lagoon he imagined. It’s a service station for migrating birds. In no way a bad thing. Pelicans, gulls, kingfishers, coots, sandpipers, cormorants, egrets (snowy and otherwise), those ones that drill their whole beaks into the sand.

Camarillo is charmless. Go if you like outlet stores and freeways. There is a ‘delighful Old Town’ but it’s next to a freeway and not very old. Maybe it’s old if you’re not from Europe. Maybe it’s delightful if it’s open. It’s not open.

Planned to go to the Getty Villa but we can’t find it. Says it’s in Malibu. We’re almost back in Santa Monica before we spot it. It’s now 5pm. The call of cold beer and a relaxed dinner in Venice is too strong. We drive past. Next time…

One thought on “Driving the Pacific Highway”