Returning to a country you haven’t visited for 10 years is a bit like catching up with an old schoolfriend. How will you both have changed? Will you be able to recapture the good times of old? Is it still funny to shout out euphemisms for genitalia in class while the teacher’s back is turned?

OK, perhaps not that last one. But flying in to Guatemala, where I spent five weeks in both 2003 and 2004, elicited that same sense of nostalgia tinged with cautious anticipation.

As it transpired, I needn’t have worried. Everything that makes it so easy to fall in love with Guatemala is just as it was. The people are still hospitable and humorous, the food still simple but fresh and nourishing, the towns and villages still a panoply of colour.

The soundtrack to all of this, as ever it was, is provided by the cries of street-hawkers and the roar of the country’s famous ‘chicken buses’, old US school transport converted to carry the maximum number of passengers and tricked out by drivers competing to display the maximum amount of bling.

Most travellers set up home initially in La Antigua, the country’s capital until the mammoth Santa Marta earthquakes of 1773 triggered a move to modern-day capital Guatemala City. Antigua is ‘the place to stay’ for good reason. Its cobbled streets and brightly-painted stone houses are interspersed with ruined but well-preserved churches and monasteries, frozen in time since they were laid low by successive earthquakes.

The backdrop to all of this is the eternal looming presence of Volcan Agua, watching over the city like a strict museum curator ensuring it never loses its ancient charm. Not only is Antigua far safer and prettier than the capital, but it is almost as well connected for most travel destinations in the country.

On my last visit, I was learning Spanish at the excellent Probigua language school. Antigua boasts an abundance of escuelas where you can learn the lingo but Probigua (PROyecto BIbliotecas GUAtemala) is different. Many of these places are simply out to extract as many Quetzals (local currency) as possible from the gringos but Probigua is a non-profit organisation. Your fees are ploughed into literacy programmes and students join the school’s staff on weekend expeditions in the Probigua travelling literacy bus to deliver books and computers to schools in the region, most of which are sadly lacking in resources. 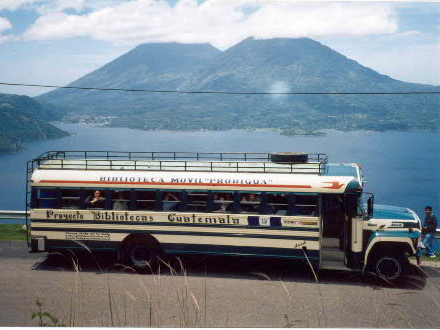 It was heartening to see the old place that taught me my rudimentary but passable Spanish, apparently thriving as the best place to learn the language in Antigua.

I was even more excited at the prospect of visiting Veronica, the lady with whom I stayed both times I was last here. I used to call her mi segunda mama (my second Mum) and we would joke long into the evening while enjoying her delicious and wholesome cooking, including her excellent guisquil (also known as chayote, a local squash-like vegetable).

Through the haze of a decade’s new memories, I managed to remember where she lived and, totally unannounced, Franki and I made our way up to her house. Cue a very happy reunion as she invited us in to see the upgrades she has made to the family home.

She has acquired five grandchildren since I last stayed with her and most of her extended family now lives in the rooms she once let out to language students like me. I remember well how she and her sons had squeezed into two small rooms to accommodate guests, in order to make enough money to improve their circumstances.

Well here were the fruits of her labours, 10 years on. She had worked hard, opened up her home to people like me, and her growing family was now reaping the benefits exactly as planned. Nothing could make me happier to see her nous and hard graft paying off. Not only that but she was kind enough to pretend that I looked very different with my nascent and still rather pitiful travellers’ beard.

So what else has changed except for Veronica’s grandkids and my ‘beard’? The active Pacaya volcano has changed a fair bit, largely because it has erupted more than once in a pretty major way (check out the video) since I first climbed it. According to our guide, the path I took in 2003 was buried by molten lava earlier this year. In geological terms, that’s a near miss.

Lago Atitlan, the idyllic lake surrounded by volcanoes, has also witnessed some developments. For starters, the lake has risen by about 10 metres in the past decade, meaning much of the dockside infrastructure is now underwater. On the plus side, the quiet hotels at Santa Cruz de la Laguna (try the uber-tranquil Arca de Noe if you get a chance) now come with added electricity. In 2004 it was candlelight only, which led to me plummeting six feet into an open sewer (thankfully dry) and landing on my knee. I can still tell when it’s going to rain by the twinge under my patella, thanks to that little mishap.

As a coffee lover (addict?), I immediately noticed a big difference in that Guatemala’s largest export is actually available within the country these days. When I first visited, all the good stuff was exported as soon as possible, hardly any of it seeing the inside of a Guatemalan cafe or restaurant. The coffee fincas were dotted around the country but you couldn’t get a decent brew for love nor money.

Now, there are a good half-dozen venues in Antigua dedicated to the art (and it is an art) of serving up the best coffee money can buy. The friendly knowledgeable guys at family enterprise Castellcafe (San Lucas branch pictured here) do a mean espresso and are particularly fond of the Chemex method of brewing coffee. You can find the Antigua branch in the Parque Central. 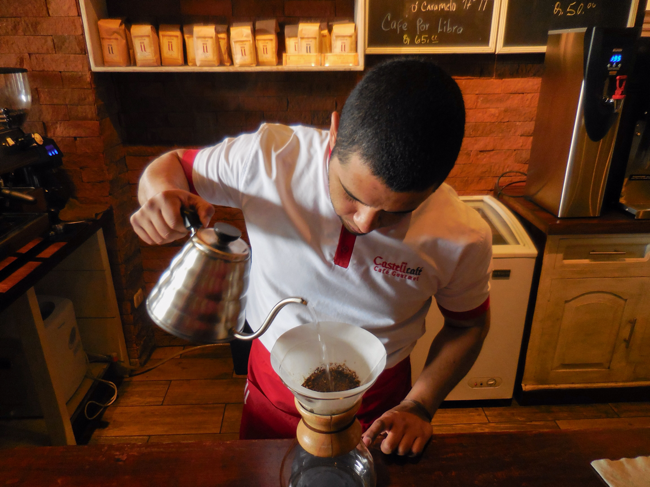 Don’t expect to find a skinny cinnamon macchiato when you’re in the depths of the jungle or up in the Alta Verapaz though. After all, you wouldn’t expect to find howler monkeys or Mayan ruins in a Shoreditch pop-up coffee house. Sadly.

Without a doubt, Antigua’s nightlife is also livelier than it once was. There are fewer tourists now than in 2004, by some estimates about half as many. But there are more bars than before and they are no longer dominated by tourists.

Whether it’s due to the emergence and growth of the middle class in Guatemala I couldn’t say, but there seemed to be more Chapins (Guatemalans) raving the night away and more places for them to do it.

Coming back to the scene of so many great memories, I was always going to notice what was different about the place. But while much has changed since I was here, there is plenty that hasn’t. For all of its stunning natural beauty and rich cultural heritage, Guatemala still struggles with chronic malnutrition and violence.

Anyway, more on that in the next blog about Guatemala, plus plenty more to come on what to do and see in this stunning country.