Throw a stone off a roof terrace in Antigua and chances are it’ll fall into a centuries old courtyard. The buildings in Guatemala’s former capital look more or less as they did when the Spanish ruled this country and they make for a tranquil setting at any time of day, but are especially romantic when lit by evening candlelight.

The one in the picture is at Epicure on the 3rd Avenida Norte and features the original stone washing baths, now used mainly by local birdlife. We also liked Cafe Condesa in the Parque Central for their hearty breakfasts and sinister legend of the murdered lover of the countess who gives the eatery its name.*

For your evening meal, try one of branches of La Fonda de la Calle Real. The food is typical Guatemalan with Antiguan specialties and the courtyards are some of the most charming in the city.

* He was allegedly buried alive inside the pantry walls by the cuckolded count sometime around the 17th century. When renovations were made hundreds of years later they discovered a skeleton, apparently buried standing up which lent credence to the tale.

2. Stand atop a Mayan ruin

No, this is not an impromptu yoga sesh. Franki is actually airing out her lower back sweat after the climb. The jungle is nothing if not humid and the Mayans liked their steps.

Tikal National Park, one of the world’s most important archaeological sites, is an obvious must-do in Guatemala and we’re unlikely to come up with anything original to say about it. But walking around this ancient city, inhabited from the 6th century BC until the 10th century AD, is one of those experiences that makes you stop and wonder at the ingenuity of pre-Columbian cultures.

At its peak, up to 200,000 people lived in Tikal, the centre of which covered six square miles. Meanwhile the 60,000 people that made up London’s population at the same point in history were admiring their brand new city wall – built by the Romans to protect the area we still refer to as The Square Mile.

Aside from the ruins, you can also hang out with monkeys (both howler and spider), tapirs, toucans, tarantulas, and even (Rob, look away now!) snakes.

3. Slide down a waterfall 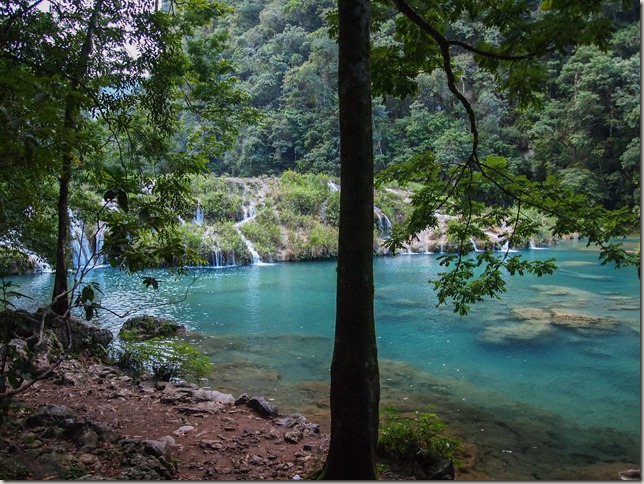 If you’re the kind of person who sees a leaf floating down a stream and thinks “wow, wouldn’t it be cool to be a pixie, riding on that leaf” (just me?) then you’re going to love Semuc Champey.

The national park is a series of terraced limestone freshwater pools connected by mini waterfalls, some of which cascade over rocks so smooth that you can slide down them as if in a water park. Climb up first to the Mirador to view the pools in all their picture-postcard glory before scrambling down for a much-needed cooling off in the clear waters.

Most hostels in Lanquin offer a full day trip to Semuc and the surrounding area for around Q170 (under £15) . This includes tubing down the river (while local children hawk cans of beer from the banks) and a swimming tour of the Lanquin caves. This candlelit adventure takes you under stalactites and over stalagmites, through subterranean waterfalls and through dark cave pools. It’s not for the faint of heart but I think we can say hands down this, combined with Semuc Champey, was the best travel experience we’ve had to date. A truly magical day.

Tip: Wear waterproof shoes or sandals to protect your feet from the rocks.

4. Wake up to a breathtaking lake view

Rob has already mentioned the captivating serenity of Lago Atitlán, a volcanic lake about two hours from Antigua. Anywhere you set up camp in the area is likely to afford you a spectacular view but here’s a quick run down of the main places to stay on its shores:

San Pedro – Backpacker central. If you want to party with fellow travellers, this is the place to come. There are hostels, cafes, and bars aplenty tucked down a winding alleyway by the lake. You can take Spanish classes or just laze about in hammocks. It’s also the only place in Guatemala where you can easily buy marijuana if that’s your thing.

San Marcos – Hippies and yoga. This chilled out lancha stop is the destination of choice for anyone seeking to reconnect with the world in a more inspiring setting. It’s busier than it used to be but you’ll still find peace and tranquility.

Santa Cruz (pictured) – Downtime. There are just two hostels here and only one of them has a bar. Perfect if you’re looking to chill out. It’s also one of the best places on the lake for swimming. We stayed at the lovely Arca de Noe (the one without the bar!)

Panajachel – Where the bus drops you off. Bigger and more commercial than the others but has plenty of choice when it comes to hostels and bars and all the lanchas connect from here so you’ll have good access to the entire lake.

5. Toast marshmallows on a volcano

How many places in the world can you cook marshmallows on the lava rock of a recent volcanic explosion? Not many, I’ll bet. But Volcan Pacaya, an hour’s drive from Antigua, last erupted in March 2014 meaning its lava field is still barbecue-hot in places. We kept it simple with marshmallows but our guide got straight down to business with sausages on skewers.

The climb up to the top is short but steep and the loose pumice makes it treacherously unstable in places. On the lower slopes, flowers bloom and the verdant forest is home to abundant wildlife. Near the top, green fades to black as the foliage gives way to volcanic rock.

“How much warning do you get before an eruption?” Franki asked.

“About an hour,” answered our guide. Plenty of time for those marshmallows, then.